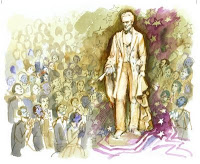 You may have heard that Abraham Lincoln turns 200 today, say, on numerous radio broadcasts, the Today Show, the New York Times Book Review, CNN, etc. But you also may be struggling to remember any specific facts about this illustrious president. You know he ended slavery, was shot in a theater, was born in a log cabin, and was tall and wore an unusually large top hat, but you may not have known the following:
We've also created a downloadable poster celebrating Abe's Birthday. Click here to download.

There Were No Strangers

Attending the Inauguration of Barack Obama

It was all about the people.

Two million of us made our way from all across the country to D.C., all of us with one thing in common: the need to be there for the inauguration of Barack Hussein Obama.

My husband, O.B., and I drove the ten hours from Maine, campaign signs in the windows – “Obama ’08,” “Obama for ME,” and “One Nation” – attracting thumbs-up, beeping horns and other signs of enthusiasm.

We stopped overnight with friends in to attend a “Toast Obama” party. One guest told of his college-age daughter spending her own money to fly round-trip from just to vote when she discovered her request for an absentee ballot had been lost. Our host read a poem by an 8-year-old African-American student from with this exuberant ending: “Grab your potential/ Reach for the sky/ Barack Obama made history/ So can I!!!!!!!!!!”

We arrived in D.C. on the afternoon of January 19, just as the “We Are One” concert was beginning at the Lincoln Memorial. Eager to jump into the action, we parked our car and gear at the home of O.B.’s god-daughter in the neighborhood and caught the Metro downtown.

Stevie Wonder sang from the Jumbotron as we wove among the enormous crowds on the Mall in the company of four young teachers-- Sherrine, Lynn, Nichelle and Jim--who we met on the subway. They helped us with directions and a recommendation of a soul food restaurant; we took photos together and exchanged emails. It was the first of many lovely encounters when strangers in the crowd became instant friends.

Just as we crested the hill under the , Obama came to the podium. The throng, filling the space all the way to the Memorial, went quiet. As our president-elect spoke of “seeing ourselves in each other” and proclaimed that “there is no obstacle that can stand in the way of millions of voices calling for change,” O.B. and I gazed around in awe, exclaiming over and over, “This is so amazin

For the next sixty hours, we spent most of our time in that blessed state. It was all so amazing. After walking among the streaming crowds for nearly two hours just to find a place we could get on the Metro, we devoured sweet potatoes, greens and smothered chicken at Oohs & Ahs on . We stopped for a drink at a restaurant bar where we met Kelly, Sarah and Kendra, three young lawyers working in D.C. When they found out we didn’t have tickets to an inaugural ball, they invited us to their sold-out charity dance.

On Monday while O.B. was at a luncheon hosted by a legal firm at the New Zealand Embassy, I attended the Martin Luther King celebration at the National Cathedral where the rousing singing of the multicolored young members of the Urban Nation Hip-Hop Choir had us on our feet, tears on our cheeks. That night at a Peruvian restaurant, El Chalan, with O.B.’s convention roommate and his friend, spontaneous conversations broke out among adjoining tables about the fabulous food and, most of all, the fabulous occasion. The inhibitions which normally would have kept us to ourselves had dissolved.

The encounters continued, on the Metro, in the waiting lines, in restaurants, on the streets. “It’s like for grownups,” O.B. remarked. A young Palestinian man wearing a kaffia, born in , now living in the , told us that Obama’s election was the most hopeful sign he’d seen for peace in the . White and black Americans marveled together at what had come to pass and how we were all connected. There was a look exchanged as we noticed the newness of the connection, the joy we shared freeing us for the moment from the painful divisions of our history.

Rising at 5:45 on Inauguration Day, we waited in line for two hours in the freezing cold with Carla and Marlon from and Diane and Bob from . By the time we got through the gate, we’d bonded so deeply that we just had to sit together for the ceremony.

It was all so amazing. Two million jubilant, open-hearted people. Sharing snacks and hand-warmers with each other and with those seated in the handicapped section. The moment when we first saw Obama’s image on the Jumbotron as he lined up for the ceremonial procession and we realized it was real, it was really going to happen! The roar of the crowd as he appeared – “O-Ba-Ma! O-Ba-Ma!” (Since when do the attendees at an inaugural ceremony chant the name of the president-elect?) The view behind us, the million or so people filling every space, as far as the eye could see.

We’re all back to our regular lives now, whether we viewed the inauguration in person, on television, or after-the-fact. We still have all those problems and challenges to deal with. But we also have the vision of what it can look like when we drop our defenses and across all our differences, reach out to each other. One nation.

It’s all about all of us. 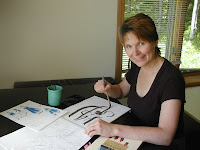 You can see a sketch Annie drew at the ceremony and a poem she wrote about the experience at her blog, “Coloring Between the Lines.”

Posted by Anne Sibley O'Brien, author/illustrator of After Gandhi: One Hundred Years of Nonviolent Resistance and The Legend of Hong Kil Dong.