Chris Barton's first book for children wowed 'em in Wooster. Ohio, that is.

Chris recently traveled to the great state of Ohio, the home of the Day-Glo Corporation--which was founded by Bob and Joe Switzer, the subjects of his book--to visit the Buckeye Book Fair. While there, he took the opportunity to visit the Day-Glo plant. Read all about it at his blog, Bartography.

From the photos, this factory looks like the most beautiful place in the world to work. But that broom is mostly useless, if you ask our Irish mother.

The Day-Glo Brothers has enjoyed a great run right out of the gate:

"Barton takes on the dual persona of popular historian and cool science teacher as he chronicles the Switzer brothers' invention of the first fluorescent paint visible in daylight. "
--Publishers Weekly, starred review

For the longest time, I avoided writing about my family.

My husband, who knew all about my interesting childhood, couldn't fathom why I'd waste "such a gold mine."

He'd shrug, muttering about how "you can't make this stuff up."

I had written three novels for young readers, none about my life in particular, though my first came the closest. That one, How I Survived My Summer Vacation, is about a boy who wants to be an author.

The next two, The Girlfriend Project and Nothing, are, respectively, about a boy who wants a girlfriend and a boy who develops bulimia. (My family, startled by the subject matter of the latter, asked for several assurances that I was not, in fact, writing from experience. I was not.)

But I'd never written a novel about a girl.

Or, more specifically, a girl who was born in Israel, lives in immigrant poverty, and tries desperately to understand the American dream.

And I never thought I would, until I met the late Paul Zindel, renowned author of The Pigman, at a writing luncheon. Offhandedly he commented that all of his books are autobiographical.

"Doesn't your family get angry with you for writing about them?" someone asked.

"Yes," he replied casually. "But then they ask me who's playing them in the movie."

It got me thinking. More than thinking, it got me writing.

I started with the basics: A thirteen-year-old girl, born in Israel, growing up on Staten Island in the 1980s.

I added: She hates gym, watches too much TV, and, most distressingly, can't get her hair to do what everybody else's hair does, that is, feathering into a set of perfect wings.

I kept going, embracing all the cringe-worthy memories of adolescence that are probably best left forgotten, much less broadcast.

I'm talking about the most private, most embarrassing, most personal kinds of thoughts a thirteen-year-old girl could possibly confide to a nonjudgmental diary with a lock firmly around its middle.

Yes, that means observations on boys, body image, desire, and self-esteem, all tinged with a palpable current of longing that could exist only within the peculiar eccentricities of being an outsider, a foreigner in a strange land, with the attendant constant feelings of being excluded, different, and even unwelcome.

Then I added the fiction. Or, more to the point, I added what I would have liked to see in real life if I had been in charge of the story.

A seductive concept, to be sure. Maybe even literary therapy.

I had a finished draft all ready to go in 2004. Little did I know it would be five rewrites and five years before my draft became a published novel. 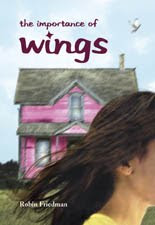 The responses from editors were surprising, to say the least.

"This can't really have happened."

More and more, I rewrote my autobiography, moving my story further and further away from reality. Finally, it sold.

The Importance of Wings was published in July, 2009.

It's still about a thirteen-year-old girl growing up on Staten Island in the 1980s, born in Israel, who watches too much TV and hates gym and her non-feathered, non-wings hair. 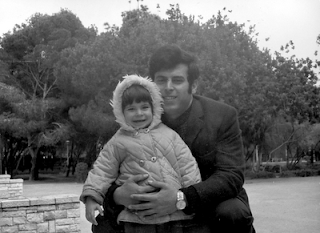 But mostly it's fiction, fiction I would have picked for my childhood story. After all, authors don't just "write what they know"; sometimes they write what they wish they knew.

As publication day drew nearer, I still had two hurdles left to clear: my sister and my mother. I stalled as long as I could, and knowing I was writing from experience, they were getting downright concerned. (My father was in the book too, but he'd always been easygoing about my writing, and not much of a reader, besides.)

I mailed my mother and sister advanced reading copies a few months ahead of publication and hoped for the best.

The verdict came back: Four thumbs up.

Along with indignant "how-come-you-never-told-me?" com 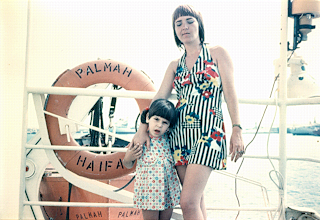 "I thought you really liked gym."

"Did you really hate your hair?"

"Were you that worried about fitting in?"

"Well," I replied, trying to shrug off the questions and trying to channel Paul Zindel, "You'll just have to wait for the movie."

Posted by Robin Friedman, author of The Imporatance of Wings.
Visit Robin online.
Posted by Charlesbridge Publishing No comments:

And some other very nice books are on this list and you can find them at PW.com.

"Barton takes on the dual persona of popular historian and cool science teacher as he chronicles the Switzer brothers' invention of the first fluorescent paint visible in daylight. "
--Publishers Weekly

"This unique book does an excellent job of describing an innovative process."
--School Library Journal
Posted by Charlesbridge Publishing No comments: