About a month ago, Charlesbridge received some great feedback from the readers whose opinion matters most--children! Ms. Rosalind Pelletier's third and fourth grade classes at The Tobin School in Natick, MA had some wonderful things to say:
Dear Charlesbridge,
I am Erin and I want to say we love your books. I am in third grade

at The Tobin School. The books I liked that you published are Different Just Like Me by Lori Mitchell and Diary of a Would-be Princess by Jessica Green. I am inspired by your editing, clear prints, and illustrations. I also like how the books were written. I loved how in the book Different Just Like Me everyone was different and it was okay. I loved Diary of a Would-be Princess because it was hilarious and it taught me a whole lot! I also was surprised when Jillian got the school citizenship award.
You guys and gals have excellent talent.

Dear Charlesbridge,
Hi. My name is Drew. I am in third grade at The Tobin School. My teacher loves your books! My favorite books are Diary of a Would-be Princess by Jessica Green, Alice and Greta by Steven J. Simmons and illustrated by Cyd Moore, and Our Seasons by Grace Lin. I like them because they're funny, cool, and adventurous. I hope you have a fun time in business!
From,
Drew
_________________________
Dear Charlesbridge,
My name is Amelia. I go to The Tobin School. I am in 3rd grade and I'm 9 years old. I loved the way you guys published Diary of a Would-be Princess by Jessica Green. Happy publishing!

I am in 4th grade at The Tobin School. Thank you for publishing all those wonderful books. I especially like Alice and Greta by Steven J. Simmons. I love it because it's so funny and teaches a good lesson. Thank you again.
From,
Sophie
_________________________ 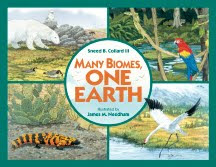 Dear Charlesbridge,
My name is Shidong. I am 9 years old and I am in 3rd grade. I go to The Tobin School in Natick, MA. My teacher loves your books. We read a book that you published called Diary of a Would-be Princess by Jessica Green. We also read a book called Many Biomes, One Earth by Mr. Collin [Sneed B. Collard III]. What I liked about Diary of a Would-be Princess was it was so hilarious. I thought the book Many Biomes, One Earth was very educational about what the biomes look like and animals' habitats. I hope I can see some of your other books!!
Sincerely,
Shidong

My name is Emily, I am in 4th grade and go to The Tobin School. Thank you for publishing all these great books!! My favorite was In My Own Backyard by Jud Kurjian. We used it for social studies. Please write back soon.
From,
Emily
P.S. I liked the book because it shows how the earth changed.
Posted by Charlesbridge Publishing 2 comments:

Email ThisBlogThis!Share to TwitterShare to FacebookShare to Pinterest
Labels: Alice and Greta, Back to School, Diary of a Would-be Princess, Different Just Like Me, In My Own Backyard, kids, Many Biomes One Earth, Our Seasons

It was the summer of 2007 and I had a book to write. The time had come--no more stalling: "Let's wait a little longer and see what happens up on Mars." That had been my excuse for two years. The Mars Exploration Rovers had landed in January 2004, their mission planned to last ninety days. Then I was to write the book. But the rovers didn't break down or even stop, and the mission went on, and on, and on, and on (and it's still going as I write this in 2010).

In 2007, I had plenty to write about. Tens of thousands of images and an immense amount of scientific data had been sent to Earth, and scientists were forming a detailed geologic picture of the planet. All along I had followed the mission, checking in on the progress of the rovers via NASA's websites, press releases, and publications; reading scientific and technical articles; and devouring the latest books by Jim Bell and Steve Squyres (the main guys behind the mission), calling them at their offices at Cornell University.

But enough--surfing, reading, talking, thinking--it was time to write! Trouble was, I had just experienced a major life change that was only going to get more challenging. In June 2007, my family and I moved to New York State after two years in Anchorage, Alaska. My father was terminally ill and needed care. The moment I stepped off the one-way Alaska Airlines flight into Newark, I became his primary caregiver. (Did I mention that I had four children--ages 8 to 18 at the time--who were not thrilled about the move?) Before confronting the overwhelming task of registering children in new schools, organizing medical care, and learning everything there is to know about catheter bags, my family and I went to the beach for a one week vacation. I brought along my Moleskin© with the idea of beginning my book. This is what I wrote:

I am on an island, on a beach, fishing. The sun has set, but the sky is still pink on the edge. A bell rings constantly from the point of the land that curves into the sea. People line the shore, some wade into the channel, casting into the darkness. Behind me the Moon is up, a crescent in the sky, and nearby a bright dot shines steadily--Venus, I think. Mars is somewhere out there, too. I am trying to imagine myself there, on a distant land, where there is no ocean and where the daytime sky is always pink. If I were there, I'd be bundled in a spacesuit with no chance of actually touching the land with my fingers, or feeling its bitter dry wind in my face. So, how do I write about this distant place--my only reference the postcard photographs taken by little cars that carry cameras and rove its surface? How do I write about a place where I have never been, where no one has ever been?

S0 the next day, while sitting on the beach, these words popped into my head: cars on mars. That was it, of course! That was the title--it was so obvious, yet it had taken more than two years to materialize in my mind. Suddenly, I had something familiar to work with. . .the rovers were like cars on a road trip. And I'd had a lot of experience with road trips--Colorado to New York, New York to California, California to New York, all of Ireland, and the biggie--New York to Alaska on the Alaska Highway, through British Columbia and the Yukon.

As one always does before a road trip, I made lists:

I sketched out a book dummy, complete with talking rockets, signs, arrows, and a new-car sticker (now that was shocking). My Moleskin© was filling up.

But when we returned home from the beach I was immediately confronted with the enormity of my task (my father, not the book). My father, although 86 years old, gravely ill with prostate cancer, heart failure, kidney failure, and dementia, informed me that he was not planning on dying. 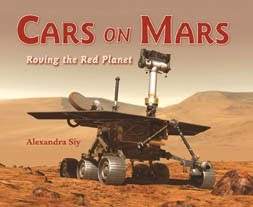 ars became my escape from the demands, complexities, frustrations, fatigue, anger, and grief of caring for my father. When I sat down at the computer, I felt like I was buckling my seat belt and leaving everything behind. What a grand road trip it was! Spirit and Opportunity were my cars, my personal ride. We traversed another world, discovering rocks and soil named after girl baseball stars from the forties (my father was the one who taught me to love the game), climbing hills (my father was the one who taught me how to drive a stick), and descending into craters (he also taught me how to ski). I spent three weeks in a coffee shop (no kids, high speed internet, and endless coffee) pouring over the astonishing high-resolution digital photos taken by the rovers to the soundtrack of The Grateful Dead, The Doors, Led Zeppelin, and The Rolling Stones (just like a real road trip).

I worked on the manuscript into the spring of 2008. I'd transported my father to the hospital and doctors' dozens of times for falls, catheter bag complications, heart failure, and blood transfusions. On the way home from one appointment I pulled into the grocery store and ordered him to stay in the car (he never liked being told what to do). I handed him a copy of the manuscript and told him to read it. I knew he would get bored quickly and then get out of the car and wander into the road, so I raced through the store. When I returned he was still buckled in his seat reading. "Did you write this?" he asked. When I said I did, he asked again, "Did you write this?" (Dementia is like that.) Then he said, "This is fantastic. You wrote this? This is amazing. I hope you get paid for this."

When I was eighteen my father told me I couldn't be a writer. "They don't make any money," he had said. It took me a few years to accept that I didn't want to be a doctor or a lawyer (like he was)--but to be a writer, as I had dreamed. Cars on Mars: Roving the Red Planet was published eight months after my father died. It was my fifteenth book. But I will always think of it as the book that made me a real writer--in the eyes of my father. That means a lot.

Posted by Alexandra Siy, author of Cars on Mars, Sneeze, Mosquito Bite, and Footprints on the Moon.
Posted by Charlesbridge Publishing 1 comment: