Can there be any more basic question for a first-time author as his debut effort finally reaches the marketplace? In my case, at least, yes there is.
And it's this:

Since I began work eight years ago on The Day-Glo Brothers -- the story of how two polar-opposite siblings came together during the Great Depression to create daylight-fluorescent colors -- I've encountered two recurring reactions as reliably paired together as Goofus and Gallant.

From one of my partners at the very first critique group I ever attended: "Love the topic!"

Soon thereafter, from one of the first editors to see the manuscript: "This topic is too rarified."

In an introductory email from an already published author of nonfiction: "It had never even occurred to me that someone invented Day-Glo!"

Discreetly asked by one attendee of an author panel I'd just participated in: "What's Day-Glo?"

My all-time-favorite combination of these reactions came the day after I received Tony Persiani's final sketches. Without planning to, I found myself test-marketing the sketches to two very different audiences.

First was at my dentist's office. When the hygienist wasn't in the exam room, I pulled the sketches from my bag to review them. When she returned, she asked about the pages in my hands. I clarified that I'd done the text but not the art, and then I explained what Day-Glo is and hit the highlights in the story of how Bob and Joe Switzer had invented those colors.

Next was at my mechanic's. One moment I was giving him my email address for his mailing list, and the next thing I knew we were discussing the book-marketing plans behind my vanity web address.

For this tangent we'd gone off on, I was lucky enough to have not one but two visual aids: the sketches I'd again taken from my bag, and the daylight-fluorescent green service report on the counter between us.

I poked the report and said, "I've written about the guys who invented this color."

My mechanic's response was, "Wow!"

Until a month or two ago, I honestly had no idea which reaction would win out. Would audiences scratch their heads over why anyone would choose to write, let alone publish an entire book, about such a random topic?

Or would they share in my delight that this off-the-beaten-path story -- which struck me long ago as having the potential to be one cool-looking picture book -- had been so vividly executed by Tony and the folks at Charlesbridge? In other words, would they get it?

Early signs are encouraging -- reviews have been full of plays on "bright" and "brilliant" and "enlightening." While I had hoped for that response to the Switzers' tale, I hadn't counted on it. And I certainly hadn't counted on the reactions I've received to my own journey with this story. The obscurity of the topic, rather than being a handicap, is being seen as a virtue, as a sign that turning it into a book involved considerable legwork, much of it uphill.

It did, and it was. But I have to confess, it's also been fun. The research was fun, from interviewing Bob and Joe's spouses and little brother (all now in their 80s or 90s) to laying my hands on the actual, original notes from the Switzers' first experiments.

It was also fun to figure out how to tell this story in a way that takes the science seriously without letting explanations bring the narrative to a halt -- right up through the final, last-minute text change that my editor and I worked out in real time via cell phone and instant message.

And now that I think about it, not knowing how the end result would be received, or even what the end result would be -- well, that was fun, too. It reinforced the fact that I was chasing after this project not because of what others' reactions might be, but because I loved the story, believed in its possibilities, and was enjoying myself mightily.

I guess it must show. When Seven Impossible Things Before Breakfast featured Tony and me at the end of June, one commenter noted, "Chris's enthusiasm not just for the subject itself, but for learning about it, is palpable and infectious." 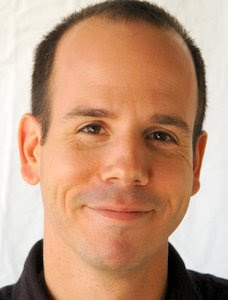 Chris Barton is the "bright," "brilliant," and "enlightening" author of The Day-Glo Brothers, with "exhuberantly retro" illustrations (so says Publishers Weekly!) by Tony Persiant. New from Charlesbridge.


Download this activity and discussion guide.
Watch this animated explanation of the mechanics of fluorescent light and color.

"The story is one of quintessentially American ingenuity... "
--Publishers Weekly

"This unique book does an excellent job of describing an innovative process."
--School Library Journal
Posted by Charlesbridge Publishing

Chris,
What a fun story about your book. I really enjoyed hearing some behind the scenes story. It was great visiting with you at TLA and seeing the preview. I need to get a copy and blog about it like I promised! It would be great at SimplyScience. Congratulations on a great job and wonderful reviews! You deserve it. What's next.

Thanks, Shirley! "What's next?" is a great question. As much fun as I'm having launching The Day-Glo Brothers, I can't wait to roll up my sleeves and start researching something new...