Books help us deal with the tough times 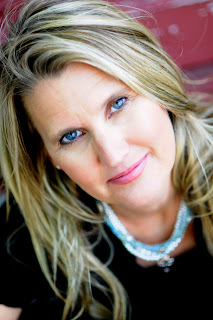 It started with a lump in my throat. "I don't know if I can do this," I told my sister.

The feeling caught me by surprise. I had read and discussed my first book, Emma's Question, with all kinds of audiences--from wiggly preschoolers who made it through without having to go to the bathroom, to elementary school children who did not chase me off with iguanas and other classroom pets, to teachers and librarians used to hearing from famous authors. I had spoken with a steady voice and without tears, even though the book is based on an emotional time in the life of my family.

This time, however, I struggled with a stinging behind my eyes. I suddenly realized that this event--Sunday brunch at the Voxland family reunion--was dangerous territory. Clutching my book, I stood up and glanced at the group, all wonderfully and terribly. . . familiar. Smiling back at me were all the aunts, uncles, cousins, and other family members who populate my richest memories: the five once-lightweight kids who water-skied all together behind our Aluma Craft runabout; the uncles from the family farm "up north" who pulled the hay wagon while we city kids sat squealing atop a quivering tower of bales; the cousins with whom I shared Orange Crush and Cheeze Wiz sandwiches in Grandpa's cow pasture.

For the first time in years, the three remaining generations of Voxlands had gathered together--with one important exception. And that was the problem. It was as if there were an empty chair front and center.

Missing from the gathering was my mom, Randie Louise Nelson, daughter, sister, mother, aunt, grandmother--and the subject of Emma's Question. Unfortunately for all of us, she died in 2001 after a long and courageous battle with cancer.

As a new author, I love every opportunity to read Emma's Question and talk about my mom, and I believe the book is 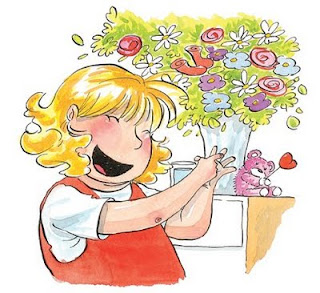 more hopeful than sad. But on that day I wondered . . . why did I write about something so personal and so hard? The answer is complicated. First, as an obsessive worrier, I have little control over the voices that pop into my head. The day I started the book Emma was a voice stuck in my brain, a little girl standing on a chair crying, "pay attention to me!" She was the little girl in me who just wanted my mom to get better and everything to go back to the way it was before. And she wouldn't be quiet.

Second, as a writer I believe that sometimes our best stories come from the experiences we'd least like to write about--our sharpest pain, our deepest fear, our most humiliating moment. When I visit classrooms, I encourage students to dig into these memories for the seeds of a story. If the incident carries deep emotion for the writer, the readers is likely to feel that emotion, too. The phone call telling me my mom was sick was a seed for Emma's Question, just as the humiliation of sticking the blue paintbrush in the red paint during my early days of kindergarten was a seed for my second book Polka-dot Fixes Kindergarten. (A bit of emotional baggage can be an asset).

Third, as a mom and someone who loves children, I believe that stories about difficult topics prepare children emotionally for life's inevitable challenges. As parents, we sometimes resist reading or talking to children about hard things until they occur. Deep down we want to protect the illusion (ours and our children's) that life consists of routines that we can count on forever--like the ice cream truck that rolled down our street every sunday night. These routines are a rich and comforting part of life, but they are not the whole picture. Inevitably, we all experience the telephone call that changes everything. When a child reads about hard topics--whether it be dealing with the illness of a family member, losing a pet, or confronting a bully--it helps prepare her to deal with emotionally charged situations before they occur and helps give her empathy for other children going through hard times. Sometimes books that deal honestly with emotional topics do trigger tears--though usually from the adults. (My experience is that children are often more curious than sad).

I made it through the reading of Emma's Question at the Voxland family reunion. My voice wobbled a bit, I stumbled over a few words, and I didn't look at the audience? It wasn't a stellar performance, but no one seemed to notice. Afterward, there were a few tears, along with laughter and hugging--lots and lots of hugging.

And that is life.

Catherine Urdahl is the author of Emma's Question. Visit her online at www.catherineurdahl.com.
Posted by Charlesbridge Publishing 1 comment:

When Things Don't Go Your Way, Go Theirs 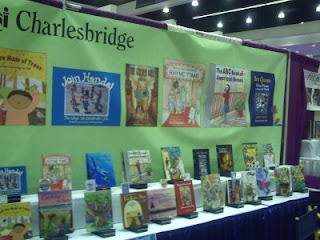 ALA 2008. What an exhibit booth might look like.
In the publishing game there are these things called 'exhibits.' These are places that a fraction of the publishing company's staff go to in order to display the company's books and discuss services, exchange ideas, share knowledge, and learn from the folks on the frontline who are putting said books into the hands of little children who will then read them. Exhibits are good. They are fun and, on the surface, easy.
But we all know that something nefarious lurks beneath the surface. Something there is that does not like order and organization. Chaos, I guess. A quieter sort of chaos, however. One more like a sunburn than a fever. Makes it hard to sleep, but a little aloe vera and you will soon find comfort enough. Maybe an aspirin.

This year is Charlesbridge's 20th anniversary. So, we created a banner of such beauty and whimsy (Possible? Yes.) to hang in our booths at exhibits such as IRA, BEA, and ALA. It's easy:

Step 2: Ship it. (Time to apply a liiiiittle sunscreen. Theoretically, you fill out the shipping papers, box up your stuff, and give it to someone who puts boxes on a truck, takes them to where you've told them to take them, removes the boxes at the final destination, and goes away. Voila! Shipping defined. However . . .)

Step 3: Hang your banner! (And here is where your skin starts to really blister. Hang 'em if you got 'em, sucka!)

Step 3 is where we got hung up (or not, as the case may be) this year at ALA. We had a slight snag with Step 2 after BEA when our shipment came home sans banner. It did show up some time later, and just in time to make it into the ALA shipment with hours to spare. Ah, the hectic fast paced, but certainly glamorous (no one's complaining), life of the exhibit planner.

All's well? You wish. I do, anyway. How could it go wrong, I pondered. Banner with shipment on skid encased in shrinkwrap. All those boxes are now as one. Nothing nor nobody can tear them asunder.

You naive, simple-minded, oh-too-trusting exhibit planner. Ha, ha, ha. That banner is not going to ALA. You'll never know where it went. Did it even make it to Chicago? God in His Heaven only knows.

BUT! Here is where the aloe vera comes in. No banner? Not the end of the world (but all you ALA attendees were deprived of the sweetest booth banner this side of the Pecos). No banner, but you gotta do something. So, lovely, talented Meg Bencivenni--School and Library Marketing at Charlesbridge--fashioned the loveliest and most talented booth banner in the WHOLE WORLD! One co-worker dubbed her Meg-gyver for using her wits when the pressure was on. With just some tape and a few zillion catalog covers, Meg made do. (See Meg reading about the perfect fairy tale exhibit booth?)

AND, here's where the aspirin comes in: the lovely and sympathetic Elizabeth Bird, blogger Fuse #8, saw fit to recognize the ingenuity of an exhibitor without a banner by declaring Charlesbridge the winner of the Best Last Minute Banner Because the Real One Didn't Get Delivered Award (Scroll down just past Neil Gaiman and just before the Storm Troopers). 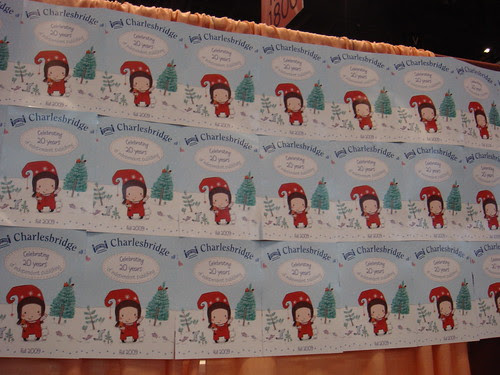 From Fuse #8. Meg's clever interpretation of a booth banner,
called "Booth Banner For Banished Banner"
If you are interested (if you're still here), this is what the banner is supposed to look like:

Now close your eyes and imagine it ten feet wide and with Meg proudly standing in front of it.
Now my tale of woe is ended. To quote Bob Dylan, "Nothing was delivered/And I tell this truth to you/Not out of spite or anger/But simply because it's true."