Writing and illustrating children's books can be a solitary activity. Sure, there are school, library, and bookstore visits, but much more of my creative time is spent alone at a drawing desk, trying desperately not to be distracted by email, food, or my cat. That's one of many reasons I'm very excited about my OddAnimals project at the Children's Hospital Boston. Starting this past November and continuing through February of 2011, I will be working with patients, families, and staff of the hospital to create animals that have never been seen before by the human eye. We call them OddAnimals. These newly-discovered species will be displayed in the gallery in the lobby of the hospital. It's being guest-curated by Emily Isenberg and presented by Jessica Finch and her Art for Kool Kids Program. 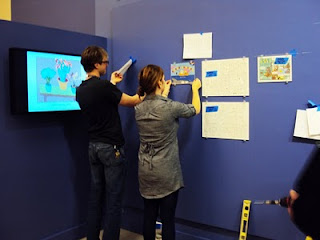 Anyone can submit their own personal OddAnimal by attending a workshop or filling out an OddAnimal guidebook and dropping it in the mailbox in the Children's Hospital lobby. You, yes you, can even download the guidebook and email your completed form back to me. 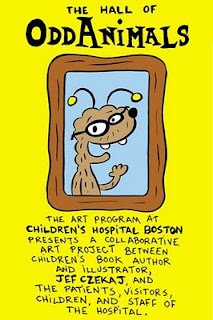 "Now, what is an OddAnimal?" you might be asking yourself right about now. Um, I don't know, but through a series of workshops, activities, and conversations, I hope to find out. We've already distributed over 500 guidebooks and have received a bunch of great submissions. I have met incredible kids and awesome families who were excited and willing to help me out with this admittedly weird project.

As always, I am inspired and awed by the imagination of children. In fact, I see my main role in this project as trying not to mess up their perfectly great ideas and drawings. I haven't really even had to explain what an OddAnimal is, and most of the children already have an idea of what theirs will look like as soon as I sit down with them.

To introduce myself to the population of the hospital, we have installed a wall's worth of my artwork, including 2 pages from my Charlesbridge book, A Call for A New Alphabet, as well as pages from some of my other books and some cool, big wall stickers of the letter X and his friends. 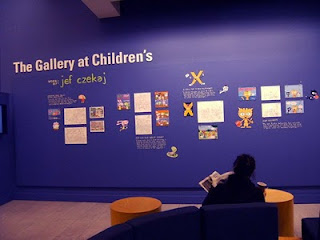 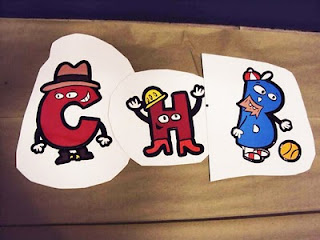 Here are a few examples of the work we've created so far:

The Chale by Kaleb 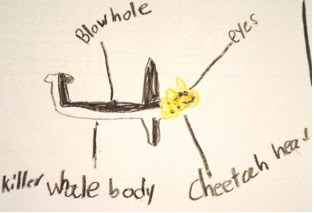 "The Chale is a joyful, ocean-dwelling creature. Its slimy, elephant-sized body resembles that of a killer whale, but its head is closer to that of a cheetah. This playful animal feeds on penguins, krill, shark, cuttlefish, octopus, and squid, and is known for its ability to swim up to 500 miles per hour." 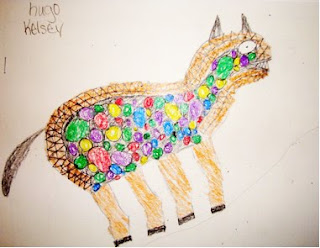 elephant. Its green, purple, yellow, red, blue, orange, and black scales derive their color from the jelly beans that make up its diet. Its main activity is snooping around its mountain habitat in search of other animals to play with." 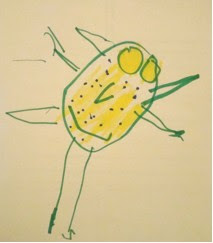 ight is a dinosaur-sized creature that lives in the mountains. Despite its angry nature, this sleepy animal is an herbivore, eating only leaves. It has fuzzy, green skin with blue spots." 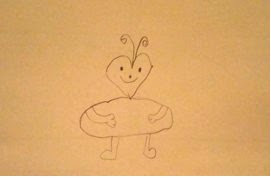 forest in search of blueberries, which it eats with an extremely long tongue. It has fuzzy black and white fur."


And my interpretation of him: 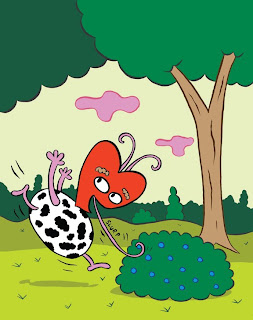 You can see some more OddAnimals on our Tumblr page or my Facebook page. Or, better yet, come by the Children's Hospital Boston to see the ever-evolving Hall of OddAnimals!

And here's the link to the book trailer for my new book, A Call for a New Alphabet!

Posted by Jef Czekaj, author and illustrator of A Call for a New Alphabet, due out February 2011.
Posted by Charlesbridge Publishing 2 comments:

Hangin’ Out with Uncle Wiggly Wings: Researching and Writing Candy Bomber: The Story of the Berlin Airlift’s “Chocolate Pilot”

It seems I have a fasci 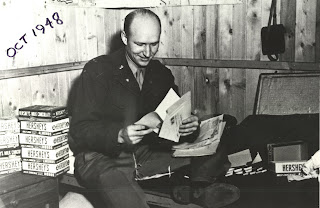 nation for true stories about children who endure tumultuous events in history, as I tend to write about them (The Children of Topaz; Brothers in Valor). So when I ran onto the story of the Berlin Candy Bomber, it was a natural fit, for it concerned children who suffered through years of war—some young enough to have only known a life of hunger an 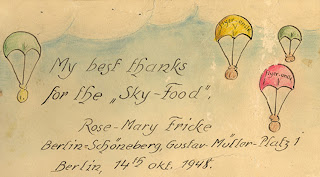 d fear. The candy-laden handkerchief parachutes dropped over West Berlin by Gail Halvorsen, a young American pilot, lit up a dark world for kids who hadn’t tasted chocolate in years. But the mere gesture of kindness also offered those children both healing and hope amidst the rubble of WW 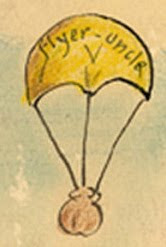 II. Forevermore, those kids remembered Halvorsen as Uncle Wiggly Wings (because he wiggled the wings of his plane to signal a candy drop), the Chocolate Pilot or Chocolate Uncle, and, of course, the Candy Bomber. In the photograph above, you see Halvorsen sitting on his cot reading letters from grateful West Berlin children (note the boxes of Hershey bars behind him).

As you know, writers, particularly of nonfiction, must do their homework--in other words: research, research, research. When writing about history, we spend lots of time checking secondary sources—books, magazines articles, etc. But we really get excited about primary source materials, such as letters, diaries, or (better yet) living people who were “there.” Of course, most historical events happened so long ago that finding and talking to folks who experienced those events is impossible (unless you know a good medium who can help you talk to the dead).

The World War II era (and its immediate aftermath) is now far enough in the past that we are beginning to run short of war veterans who can tell us first hand about that great and terrible conflict. Gail Halvorsen, the focus of my book, was a W 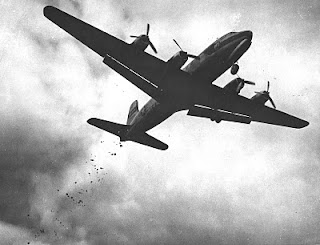 W II pilot who was sent to Germany three years after the war ended to fly supplies into West Berlin. Our former ally, the Soviet Union (Russia), had turned against us and blockaded the surface routes into the American, British, and French sectors of the former capital city. To keep the West Berliners from starving, we flew in enough food and fuel to keep two million people alive for more than a year. Most of the flyers during what was known as the Berlin Airlift had been pilots during WW II, and not many of them are around anymore. So, to discover that Halvorsen was not only alive but also vibrant—and to realize he lived close to me—was more than exciting. It was exhilarating!

Meeting and getting to know Gail Halvorsen (who just turned ninety this year and is still qualified to fly C-54 cargo planes!) left no doubt this was a book I wanted to write. I discovered he is in constant, worldwide demand to tell his story, and so he travels a great deal. He goes to Germany often, where the children of 1948 still remember and love him, and he is regularly invited to present to school children, church groups, community organizations, and so. As a result of these ongoing appearances, he put together a short video presentation about the origins of the Berlin Airlift and about the implementation of his idea to parachute candy to the children. Here is the link to that presentation (http://www.youtube.com/watch?v=H-4vE6DCLeU). Click on it, and you’ll hear Gail’s voice narrating. You’ll also see some of the 8mm movie clips he shot of the Berlin Airlift in progress, as well as his “candy bombing” operations. I must say, it’s educational and inspiring.

As a result of his 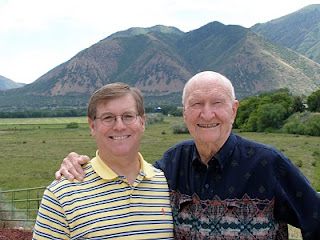 travel schedule, I usually met with Halvorsen between trips while I was working on the book. That’s when I’d drive out to his small ranch, which lies about 20 miles south of my house in Orem, Utah. It has a beautiful setting, as you can see from the photograph of Gail and me with the mountains in the background. Gail allowed me access to his files, and therefore I was able to scan over 300 of his photos (many of which appear in the book). Of course, we had many long conversations, and he was always available, if not in person then by phone or email, to answer my endless questions, verify facts, or simply to visit. I think it’s safe to say that we became friends, which was the very best outcome of my writing project.

Gail Halvorsen lives in Arizona these days, though he still owns and maintains his place in Utah (which, by the way, is his home state). Therefore, I seldom see him now—only when he blows into town to check on the ranch or visit family. But we still keep in contact, mostly via email. The last time I saw Gail was in early October (2010) when I received a call from him letting me know he’d be in Utah during the next few days. Of course, he was leaving soon after his arrival for far-flung spots—he’s still a veritable globetrotter and was heading to G 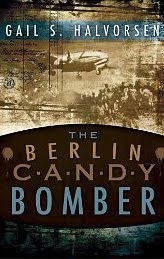 ermany again and then to Afghanistan, where the U.S. Air Force had invited him to participate in an airlift mission. Amazing! At any rate, he came by my house to pick up a half dozen copies of Candy Bomber, as he’d run low on them and needed some for some an upcoming event. Of course, Gail has written his own book for adults titled The Berlin Candy Bomber, and he sells a lot of them everywhere he goes. But he’s also very good at promoting my book during his travels, as well as Margot Theis Raven’s picture book, Mercedes and the Chocolate Pilot.

Speaking of Mercedes, one of the best vignettes in Candy Bomber is about her. She was a seven-year-old girl living in an apartment building near Templehof Airport, where the American cargo planes landed every few minutes. She wrote Lt. Halvorsen a letter chiding him (and the other pilots, of course) for flying so low over her plac

e in his approach to Templehof that her chickens were afraid and had stopped laying eggs—but the pain of it all might be alleviated if he were to manage a candy drop nearby. Mercedes ended her letter with these words: “When you see the white chickens please drop it there, all will be OK.” As it turned out, Mercedes and her husband, Peter Wild, were primary sources for me, as well. One important item they provided was a high-resolution photo of Mercedes at age seven. Note that she is wearing black market shoes, which were often mismatched. As you can see, these shoes are not the same size, a detail Mercedes and Peter pointed out to me.

The other vignette that I found most delightful was about Peter Zimmerman, who sent Halvorsen a letter with a map to guide the lieutenant’s plane to his backyard. “Drop the chocolate there,” he wrote. Gail attempted to find Peter’s place and did make a drop—but not close enough, apparently. Another letter from Peter complained 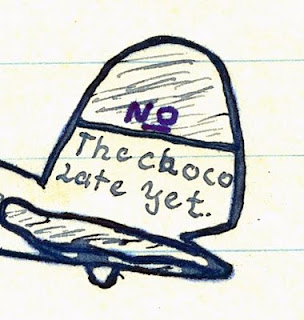 that because Halvorsen had missed his yard, bigger kids had beaten him to the candy. A drawing accompanying the letter showed a cargo plane with the words “No chocolate yet” on the tailfin. Finally, in frustration, Peter wrote this: “You are a pilot? I gave you a map. How did you guys win the war?” Drops to Mercedes and Peter were never successful, so Gail mailed packages filled with sweets to both children.

One of the most salient historical concepts is people’s capacity for inhumanity. In fact, our wars often are the events around which we organize the recounting of our history. I suppose one of the things I liked best about writing Candy Bomber was that this little slice of history reveals, instead, our capacity for compassion and love—even for our recent enemies. 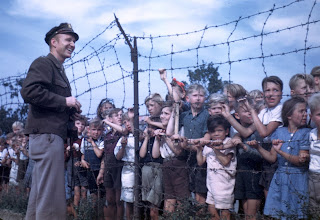 Halvorsen at the end of the airfield with German children. 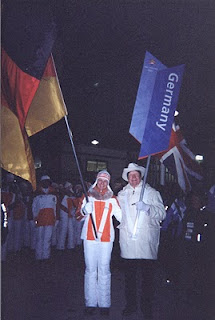