Writing Under the Freedom Tree: A Picture's Worth a Thousand (or So) Words


It started with this. 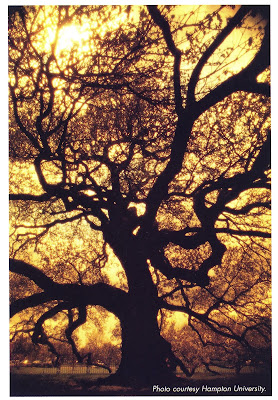 This striking photo in the back pages of a Virginia lifestyle magazine caught my eye; the caption describing it as the location of the South's first reading of the Emancipation Proclamation sent me on the research trail. I'd lived just a few miles from this gorgeous tree for many years, had unknowingly driven by it countless times. How had I never heard of it and its amazing history?

As I dug into archives and academic works, I was astonished to learn the full story. One May night in 1861, three slaves held by Confederate forces in what is now Norfolk, Virginia, slipped away under cover of darkness, stole a skiff, and rowed across the harbor of Hampton Roads to the Union-held Fortress Monroe. It was a daring and courageous act; the men risked grave punishment for the hope they saw on the other side.

Had they escaped days earlier, they would have been returned under the 1850 Fugitive Slave Act. But Virginia had just seceded and was therefore no longer a part of the United States. So the Union commander at Fortress Monroe declared the slaves enemy "contraband" and refused to return them to the Confederates.

As word spread, hundreds and, ultimately, thousands of runaway slaves made their way to the refuge of Fortress Monroe. While technically these individuals weren't free, “contraband” was surely preferable to “slave,” and a step closer to freedom. The contrabands worked for the Union forces and lived in camps they built themselves just outside the fort in Hampton, Virginia.


There, under the shade of that enormous live oak tree, slave children learned to read and write, taught by a local free black woman working with the American Missionary Association. The open-air education defied longstanding laws against teaching slaves or free blacks to read or write. These classes are considered the first at what is now Hampton University.

When Abraham Lincoln signed the Emancipation Proclamation, the contrabands learned of their eventual freedom when the document was read under the tree, likely on January 1, 1863. Though I wasn't able to confirm that it was the first reading of the proclamation in the South, it was certainly among the first.

I was stunned. I'd never been taught these documented aspects of the Civil War. We so often accept the "classic" version of emancipation, with the passive, helpless slaves liberated by the kindness of the white man, when, really, African Americans were bold, willing, and active participants in determining their own freedom.

I knew I had to write a book about it. I wanted to make sure my children and their friends learned this incredible history.

But what kind of children's book? Nonfiction, straight up? That would be a lot of dates, names, facts. Boring—and the history made under and around that tree, eventually called the Emancipation Oak, was anything but boring. I was stumped.

Around the same time, I was preparing to interview poet Arnold Adoff, husband of the late author Virginia Hamilton, for an online column, so I was reading a collection of Hamilton's speeches and essays. I was especially struck by her concept of "rememory," which she defined as "an exquisitely textured recollection, real or imagined."

As I learned more about the tree, I drove over to Hampton University to view it in person. It was a beautiful early summer day, the campus was quiet, and standing alone under those branches was a truly magical thing. I may have broken a rule, but I simply had to touch the tree. With my fingers on the bark, I could literally feel all that history, like I was absorbing those tears, that determination, the sacrifice, the hope and joy—all in that moment. It made me weep, and I'm very glad no one was around to see me.

So how best to express that? Poetry—rememory—seemed the way to go, with this spectacular tree as the axis around which the events would revolve. And so the words began to flow.

To my surprise, by the time I'd finished researching and writing about how the contrabands themselves had triggered the start of slavery's end, I'd stumbled across a fascinating full circle. I learned that it was in the waters off Fortress Monroe that the first African slaves were brought to the English colonies in 1619. 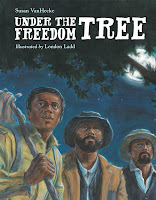 Had it not been for that photograph in the magazine, I would have never embarked on the Freedom Tree journey, even though I'd routinely traveled past both the historic oak and Fortress Monroe and had even fished Hampton Roads harbor at the very point where those three brave slaves stepped into a rowboat and made their escape.

It's made me realize how incredibly fragile history is. History must be protected, promoted, cultivated, shared—or it can be so easily forgotten or overlooked.

Posted by Susan VanHecke, author of Under the Freedom Tree. On sale January 7, 2014. Susan is also the author of Raggin’ Jazzin’ Rockin’: A History of American Musical Instrument Makers (ALA Notable Children’s Book), An Apple Pie for Dinner, as well as several books for adults. She lives in Norfolk, Virginia. Visit her online at www.susanvanhecke.com, and check out the website for Under the Freedom Tree: www.underthefreedomtree.com.