The Author and the "Pilfered Pentameter"

You can hear the interview online at http://tinyurl.com/c32rd2.

Karen Jo reads from her books Because I Could Not Stop My Bike and I Must Go Down to the Beach Again. Find these and other great poetry books at Charlesbridge.com. You never know when life will imitate a children's book.

There I was, on vacation in the beautiful Tuscan countryside, resting up after the vigors of the Bologna Children's Book Fair. My traveling companion and I had just picked up our rental car, a Fiat 500, in Florence and were heading south through Chianti country. My Frommer's guidebook mentioned that there was a lovely castle and winery outside of Greve in Chianti, so when we saw the sign for Castello di Verrazzano, we hooked a right and zipped straight up the side of a mountain into wine paradise. We drove into the estate past a large tractor-trailer that was preparing to leave, the only thought in our minds being how many wines we could sample before safely navigating the precipitous road back down to the valley.

Inside the tasting/dining room, a brick-oven fire glowed seductively, and we sampled three lovely wines, accompanied by the most delicious bruschetta ever (just olive oil and salt, but wow). We chatted a bit with the wine guy, bought a bottle of Chianti Cla ssico Reserva, and headed back to the car.

We were greeted by the sight of the tractor-trailer, now jack-knifed and blocking the exit of the parking lot. Its cargo bed, containing about 700 cases of wine headed for the US, was twisted precariously and crushing the cab. All the guests were stuck at the winery until the Italian firefighters arrived to address the situation.

Resigned to our horrible fate, we returned to the tasting room and drowned our sorrows in free wine and cheese. Eventually (the Italians have a very different sense of time than we Americans), the firefighters arrived and attempted to crane the truck's cargo back to equilibrium. Alas, it was to no avail. Next came the forklift attempts to unload some of the heavy pallets, which only resulted in the truck tipping even further in the wrong direction.

Now you would think that with wine in abundance and vehicular entertainment on display (never mind the cute Italian firefighters), that the time would have passed pleasantly. And that was indeed the case . . . for the first five hours. When it became clear that the entire truck would need to be unloaded, by hand no less, before any of us could leave our vinous prison, a certain restlessness set in along with the alcoholic sedation. Though the truck's release seemed imminent, the winery staff sensed our unease and quickly offered us a choice: two free bottles of wine each, or a free dinner. The other American guests took the wine and left, shackled to their schedules and itineraries, but I was raised never to turn down a free meal, especially in a country known for its gastronomic prowess. What followed was a seven-course meal, replete with wine parings. Not to bore you, my dear reader, but take a gander at this:

ANTIPASTO
Mixed plate of salami and other cured meats, paired with the 2006 Vino Rosso

CAFFE
Espresso and cantucci (like biscotti), paired with grappa

After a meal like that, driving was out of the question, so we threw ourselves on the mercy of our hosts and rented a room in a farmhouse down the mountain. As we wobbled and rolled out the door, I thought to myself, maybe I should have told them to let the air out of the tires on the left side of the truck and we could have avoided all this unpleasantness.

Yolanda is the editor of Truck Stuck (written by Sallie Wolf; illustrated by Andy Robert Davies), in which two children help a truck get unstuck by letting the air out of the tires.
Posted by Charlesbridge Publishing 2 comments: 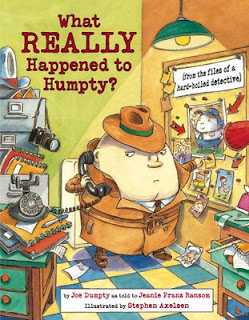 The students from Cunniff Elementary School, some of the most notoriously harsh book critics, stopped by the Charlesbridge offices last month to take a look at our spring line up. We anxiously held our breath as the children looked the new books up and down. After many minutes of silence they finally spoke. "Can I go the bathroom?" one first-grader asked. "Why is there a Mr. Potato Head on that shelf?" another student wanted to know. And "What's a typewriter?" wondered a confused kid. We slowly began to breathe again and started answering their questions. It seemed they liked the books and wanted to know more about how we made them. We took them on a tour and gave them the low-down on how books go from a typed manuscript to a polished and bound product. When they returned to their school they wrote a story about their experience at Charlesbridge, as well as a review of the book What Really Happened to Humpty? by Jeanie Franz Ransom in which they excitedly exclaim, "Good job, Jeanie!" To read their stories click on the links below: