This is the story of THE HOUSE THAT GEORGE BUILT

During a recent school visit, a second-grader asked where I got the idea for my latest book The House That George Built. While answering her question I realized this story began in the same way as most of my picture books—when I accidentally stumbled upon a fascinating, little-known piece of history which literally gave me goosebumps. In the case of George, inspiration struck when a proud dad was telling me about the White House model his daughter made for a school project. He mentioned George Washington designed and built the President’s House, yet he was the only president who never lived there. Really?!  (Cue goosebumps.) 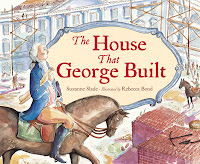 Immediately a title came to mind, The House That George Built. But before I could consider writing this story, I had to do research to determine if there was enough "good-stuff" to make a picture book (unofficial author term which means relatively unknown, yet captivating facts which lend themselves to a complete story arc with a satisfying ending). So I hurried down to my local library where I checked out The President's House, a two-volume set of colossal books filled with detailed White House history by noted historian and author, William Seale. One thousand, two hundred and twenty four pages later, I knew there was plenty of "good-stuff" for a story. Now I had to figure out the best way to tell it.

Considering the book title idea, my first thought was to share George’s story using an adaptation of "The House That Jack Built" nursery rhyme. From my research I knew George was intricately involved in the entire building process—from selecting the house design and plot of land where it would be built, to deciding the best roofing material—so I was concerned a revision of that tightly structured rhyming piece wouldn’t provide enough room for all the interesting facts I’d found. After some consideration, I decided the nursery rhyme adaption would be a fun, unique way to provide basic information about the main building elements of the house (brick, stone, wood), and by adding some lively prose paragraphs, I could share all the details of George’s huge building project.

But the research and writing of this book was just the beginning of my adventures with George. The illustration process was incredibly exciting as I watched the talented, award-winning artist Rebecca Bond bring history to life with her detailed, historically accurate sketches, which later turned into breathtaking, watercolor masterpieces.

Then came something I’d been waiting my entire writing career to do—I’d always wanted to dedicate a book to my parents, but for one reason or another none of my previous books felt right. But George was perfect! First, my parents names are George and Martha (for real), and they’d created a wonderful home for our family. So after many years, I finally dedicated a book to my parents.

Later, I had the opportunity to visit to the White House. What a thrill to personally see the magnificent home I’d studied for years. I’d be lying if I didn’t say my heart skipped a beat the first time I spied that gorgeous white stone exterior, which I’d learned turned white when it was first painted with a stone sealer made of ground-up rice. As I admired the stately two-story design, I remembered the original plans called for three stories, but without enough stone to cover three floors George had modified the plans to two. I smiled when I looked up at the massive roof, recalling that the first roof of impressive heavy slate rock leaked every time it rained.

While working on The House That George Built, I was constantly amazed by the fascinating history I discovered about the President's House (which was renamed the White House by Theodore Roosevelt in 1901), and I hope readers enjoy learning about America's most famous home as much as I did!

Posted by Suzanne Slade, award-winning author of over 90 books for children. You can find out more about her and her books at www.suzanneslade.com.

The House That George Built is a 2012 Junior Library Guild selection and was chosen for the Children's Book-of-the-Month Club.