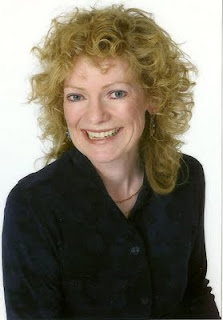 Where do you get your ideas from? People ask me that question a lot, and sometimes I hear a tiny wisp of frustration in their voices, as if maybe they think that there is some sort of secret, magic warehouse crammed with ideas, and if only I would reveal its location, then – voila – they could become the next J.K. Rowling.

I love how Madeleine L’Engle dispelled such folly when a little girl posed this same question to her. She bent down and gazed into the little girl’s face, answering, “I get my ideas from the very same place that you do.” In other words, there is no magic key to unlocking the mystery of creativity. Perhaps E.B. White sums it up best, “All I want to say in books, all I ever wanted to say is, I love the world.” Inspiration, I believe, comes from all that we love in this world - and that can be an infinite fountain. But I find it helpful for children if I narrow it down to what I call:

My Five P’s of Inspiration 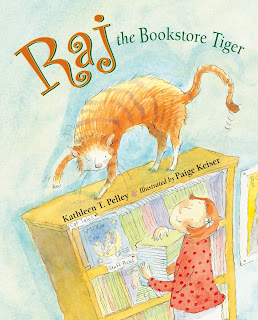 1. Poetry (and I use the term loosely to include any words that stir my soul, be they in poem, story, song, or even a snippet of a conversation)
2. Pictures (could be an actual painting, photograph, or just a visual image that has taken root in my heart)
3. Places
4. People
5. Passions

A few thoughts then on each of these as they relate to my picture book, Raj the Bookstore Tiger.

As a little girl, growing up in Scotland, I had to learn volumes of poems by heart. Like all Scottish schoolchildren, I could recite my poems as well as I could chant my tables. We never viewed such learning as a tedious task, probably because we were the product of a culture that honored the beauty of the spoken and written word. When I first came to America, I was amazed at how much emphasis everyone placed on food – the supermarkets had a whole aisle devoted to cereal! The advertisements touted a different diet every month it seemed, and always someone you met was counting calories or carbs. But yet, I never saw the same emphasis on what we feed our hearts and souls –and that puzzled me, for what better way to feed our souls than with truth and beauty –the very “stuff” of POEMS (and great stories)?

As I grew older, I came to realize just how comforting it was to have that little snippet of a story or poem tucked away in my heart to lean on in troubled times or dark days, such as “All will be well, all will be well, and all manner of thing shall be well.” (Julian of Norwich) And when my plans are turned head over heel, what better words to recall than those of our very own Scottish bard, Rabbie Burns, “the best laid plans o’ mice and men gang aft aglae.” In Angela’s Ashes, Frank McCourt described how he first fell in love with poetry. As he lay sick in the hospital, the girl in the typhoid ward next to him recited “The Highwayman” verse by verse, day by day. But when she died before finishing the whole poem, Frank was grief-stricken – not at her untimely and tragic death, but rather at having had his poem so suddenly snatched from him. Some might view this as rather cold hearted and callous of McCourt, but he already knew death well, for his poverty-stricken life so far had been riddled with it. However, this was his first encounter with a poem, and so he moved toward its grace and light and life as surely as a moth seeks the flame. As Rumi writes:

“Sometimes you hear a voice through
The door calling you, as fish out of
Water hear the waves or a hunting
Falcon hears the drum’s come back.
This turning toward what you deeply love
Saves you.”

Not surprisingly then, when I first came upon these words of William Carlos Williams, many years ago, “You cannot get the news from poems (and I would also add, picture books or stories), but men die every day from lack of what lies therein,” I knew I had the seed of a story. For many years these words simmered in my soul, until they flourished into Raj the Bookstore Tiger – the story of a little marmalade cat who is “saved” by William Blake’s poem, “The Tyger.”

As soon as I saw this picture on a greeting card, I knew I had a story. I just wasn’t sure what it would be, and of course it finally morphed into a story about a little cat who sees himself, not as a lion, but as a tiger. It is still the same basic premise: are we able to see our inner potential when we look in a 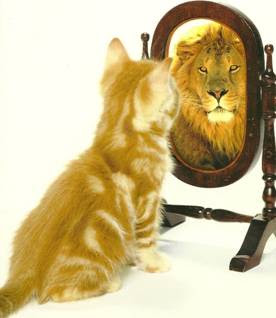 mirror? Can we see our inner tiger? Can we see our best selves? Who are we? We are more than flesh and bones, we are lions and tigers, kings and queens, we are bright shining stars – at our best, we are all of these.

I did a lot of editing on this story with my wonderful editor Randi Rivers, and along the way, I had Felicity Fotheringham (Raj’s owner) invite a guest author, Sanjiv Patel, to show the children about his native land, India. The first country I ever visited outside of the U.K. was India, and its cornucopia of sights and sounds and smells remain etched in my mind and heart to this day. Funnily enough, the month that Raj was released, off I went to India again, to visit my daughter who was working there. She even took us to a little Indian school, where I read them Raj the Bookstore Tiger. 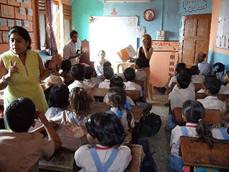 Jane Yolen maintains that “Adult books maintain lives and children’s books change lives.” The people who inspired me to write Raj – a story about how words can transform us - are really all the writers from my childhood whose words have transformed me in some way or another.

But one in particular outshines all the others. When my uncle first gave me The Lion, the Witch, and the Wardrobe by C.S. Lewis, I spurned it immediately on account of that pesky word –wardrobe. As an ardent lover of fairy tales, I simply could not accept the notion that something as mundane and perfunctory as a piece of furniture had any business being in a book about a lion and a witch. I wanted wonder. I craved magic. I needed mystery. And as far as I was concerned, all of these things were quite separate from the world of ordinary, everyday objects.

Of course, when I finally succumbed to opening the first page, I fell in love with Narnia, with those haunting images of a faun standing in snow beneath a lamppost, of Lucy chatting with Mr. Tumnus by the fireside, and of Edmund bundled up on a sled beside the Witch, greedily sipping his ill-gotten drink. I felt Lucy’s hurt and frustration when her siblings refused to believe her, I blushed for shame at Edmund’s treachery, (to this day, I associate the act of betrayal with the sickly cloying taste of Turkish Delight), I shed hot stinging tears to see dear Aslan lying bound and helpless, and in the end, I knew the triumph of winning the battle.

Jane Yolen says that, “The writer lights many candles in a good fantasy novel. The shadows they cast in a child’s soul will last for the rest of his life.” Indeed my beloved Narnia still casts its shadows on my soul. Thanks to Mr. Lewis, I see that magic and mystery merge with the mundane and the ordinary – they throb beneath all the layers of life. And I realize that we need the concrete, every day objects, be they wardrobes or railway platforms, as bridges to the Beyond. Indeed, we should never try to separate them, for as L’Engle says, “there is nothing so secular that it cannot be sacred.”

Many, many other writers too have touched my heart deeply: L’Engle, Steig, McCourt, E. B. White, Dostoevsky, Thomas Harding, to name but a few. All of them made me love more. They showed me some glimmer of hope, some glimpse of beauty simmering beneath the sometimes sad surfaces of our lives.

I once read somewhere that the difference between an addiction and a passion is that while our addictions diminish us, our passions enlarge us. My passion, of course, is stories – writing them, reading them, listening to them, and telling them. At the age of twelve, when I had to babysit a three year old, I discovered the power of storytelling. Being at a loss for how to deal with such a small child, I decided to tell her a fairy tale (I knew most of them) in my own words. It worked. She was spellbound, and so my apprenticeship as a storyteller had begun.

Ever since, I have been telling stories and reading stories to anyone who will listen. When I came to America, I began to read books on tape for the blind and I read aloud fairy tales and folktales from around the world at an inner city school in Denver. Seventeen years later, I now see the truth of what that wonderful storyteller John Shea said, “One tells a story not to educate or indoctrinate, but rather to enchant the reader or the listener into the world of the story, so that when they emerge, they do so with an enhanced view of the possibility of their lives.”

One vivid example of this: Some years ago, I read Aesop’s Lion and Mouse to a 3rd grade class at this inner city school. All year long there had been one child, the tiniest and most timid in the class (mouse-like), who had sat still and silent–never did she utter a sound. On this particular day after I asked the class, “I wonder what will you remember about this story? What will you keep in your hearts,” this little girl suddenly perked up, she knelt on her chair, jutted out her chin, and proclaimed in a loud, proud voice, “Small people can do great things.” Tears sprang to my eyes as I witnessed HOPE brimming from that child’s soul. What a tribute to the power of story – the words of Aesop slicing through space and time into the heart of a little girl at an inner city school – words that made her find her TIGER! Words that helped her burn bright like Raj. 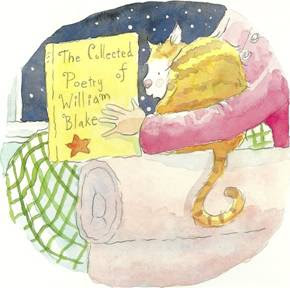 s reading aloud to Raj. She is feeding him words that will save him – words of encouragement. I love to tell children that encouragement, comes from the French word, la coeur, meaning heart, so of course when we encourage someone, we are feeding hearts and souls.

This is also my favorite illustration in the book because of the starry sky outside. It reminds me of my favorite painting by Van Gogh, Starry Night.

When I came to Colorado from my native Scotland, I found myself missing the sea a lot. I missed the salty tang of it and the foamy white crest of the waves. But here in Colorado, the skies seem vast and endless and at night, they are studded with so many stars, that it always reminds me of Van Gogh’s painting. There is also a beautiful line from a Hopkins poem that I like to match to Van Gogh’s painting -

What a lovely description of the stars. As I gaze up at the starry skies of Colorado now, I like to remember all the “firefolk” in my life – those dear writers like L’Engle and Steig and McCourt and countless others, whose words still “burn bright” for me.