Inspired by the children's book After Gandhi: One Hundred Years of Nonviolent Resistance, the Pass the Peace campaign is an effort to promote worldwide peace, tolerance, and nonviolent forms of protest.

Charlesbridge has distributed posters to local companies, started a blog chain with a Pass the Peace widget, and donated money to Wangari Maathai's organization, The Greenbelt Movement, to spread the messages of the peacemakers profiled in the book.

We urge you to participate by posting this widget to your blog, website, or social networking site, and forwarding it to others who may also wish to be involved.

The Story Behind
In November of 2004, Perry O’Brien accomplished what most consider an impossible feat in the military: he was granted an honorable discharge as a conscientious objector. Three years into a four-year enlistment in Afghanistan, Perry began having questions. “When you see a three-year-old child blown up, it forces you to ask yourself, ‘What would ever justify this?’” After long discussions with his unit’s chaplain and intensive study of philosophy and Eastern religion, Perry came to the conclusion that war had never, and would never, solve conflicts. At the age of 21, Perry was one of 31 servicemen granted conscientious objector status in 2004.

Upon his return to the U.S. Perry continued to campaign for peace. His mother, renowned children’s author Anne Sibley O’Brien, suggested that they combine her artistic ability with his knowledge of philosophy and history. Their collaboration resulted in the book for young readers, After Gandhi: One Hundred Years of Nonviolent Resistance, which highlights fifteen activists who chose nonviolent resistance as the path to change.

Today Perry continues to promote nonviolent paths to change through his work as a labor organizer in New York City, and through his website peace-out.com, where he provides information about how to obtain conscientious objector status to exit of the military with honor. Anne also continues her work as an activist, writer, and artist.

“The core of my activism,” says Anne, “is the knowledge that, across race, culture, class, and all kinds of differences, we all belong to each other.”

500 miles is a long way for anyone to walk. Let alone a child. Let alone, in the dead of winter. Priscilla of Priscilla and the Hollyhocks made that long journey in 1838 as part of the Cherokee Trail of Tears. 170 years later, Priscilla and the Hollyhocks was published, making Priscilla’s story accessible to thousands more people than had ever heard of the slave girl. Priscilla may have ended her long walk in Mulkeytown, Illinois, in 1838 when Basil Silkwood bought her freedom and adopted her, but in some ways, she’s still traveling. In the months since publication, I’ve shared her story at eleven bookstores, three blogs, one writer’s club, three author festivals, a literary podcast, four schools, an intergenerational book group, the Belmont Picture Book Festival, several newspaper articles, Merrimack Valley Magazine, three inner city after-school programs, and the Charlesbridge Spring Open House. North Andover, Massachusetts, chose Priscilla and the Hollyhocks as the book all elementary students in town read as part of the town-wide “One Community Reads” program. Illustrator Anna Alter has also taken Priscilla “on the road” in numerous events. In addition: My parents own a farm near Mulkeytown (R.R.#1, Mulkeytown), and they and I grew up there. My school bus went by the Silkwood Inn every day when I was young, though I'll admit I wasn't well aware of its history then. I do remember my maternal grandfather talking about the turkeys that would roost in the trees when the handlers would stay in the Inn on their way to St. Louis.

When I mentioned your book to my father, he was well aware of the story of Priscilla and the legendary connection to red hollyhocks in the area. I had heard the Priscilla story before as a child, but did not remember this until a friend mentioned your book, which I purchased for myself and my parents.

My great grandfather and his siblings were orphaned and taken in by families in the area. Some were treated as farm laborers, but my great-grandfather’s brother was taken in by the Silkwoods and treated kindly, according to my father. I'm not clear on the dates. I believe he would have been decades younger than Priscilla. But if it's true that she lived in and then near the house until her death and helped care for the younger children adopted by the Silkwoods, then it must follow that they knew each other. I am probably one of the maybe 10 (?!) people who watch Belmont Cable TV regularly. There I was depressed on the sofa staring at the screen when your happy face appeared reading from and talking about Priscilla and the Hollyhocks. The next day, I got the book out from my daughter’s school where I volunteer in the library. What a beautiful book. Allegra is only six and just starting to understand slavery, but she was engrossed in the story. We talked about Priscilla and how brave she was and how she saw the beauty around her even when she had so many terrible things happen to her. And of course Allegra (an only child) loved that she ended up in a HUGE family with lots of brothers and sisters.
Congratulations!
Keep writing and sharing and dreaming and hoping. And know that people in the most unlikely places are listening and thankful for your voice. Hi. I'm descended from the Silkwood family, and I have been looking for seeds for Priscilla hollyhocks for years. Do you have any idea where I might get some? I was delighted to find the book you wrote about her story. It is a good story. I'm glad it's being told. Basil was my great-great uncle, but even with that loose connection I'm still proud of him. Thanks for spreading the tale. Good luck. I hope it is very successful for you.

As an author, it was a privilege to learn and write about strong, brave Priscilla who, like Miss Rumphius or Johnny Appleseed, carried seeds of beauty wherever she went. The more I have presented about this book, the more deeply I have come to appreciate the courage of both the African-American slave child who never gave up hope and the white businessman who flouted societal conventions to make her part of his family. What a gre

at opportunity to remember the strength of the human spirit. Who knows where Priscilla and I will travel together in the future?

Posted by Anne Broyles, author of Priscilla and the Hollyhocks.
Visit Anne online at www.annebroyles.com
Keep up with Anne at http://annebroyles.livejournal.com
Posted by Charlesbridge Publishing 1 comment: 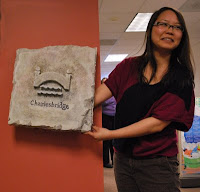 A dreary Wednesday morning (holidays are over, no more sweets left in the kitchen, sleet pelting down outside) was broken up by, who woulda thunk, a submission from the slush pile. A manuscript, author to remain unnamed, was accompanied by a . . . um, a piece of foam art? Intrigued by this art, staff gathered around editorial assistant Lynne Mehley's desk to ponder its meaning. A consensus was made--it looks like a tombstone. With daily news from other publishers about mass layoffs we felt this may be an ominous sign for Charlesbridge's future, and decided that if layoffs do occur within the company, this should be used as the pink slip.
However, note to authors with unsolicited manuscripts: sending in items like this may not get your book published (although no decision has been made on this particular one), but it will certainly help the team at Charlesbridge get through hump day.

Sales Assistant, Gina Choe, was kind enough to model the tombstone in these pictures. (Note: Gina is still employed).

Posted by Taylor.
Posted by Charlesbridge Publishing No comments: