The cat you rescue may rescue you

"When a man loves cats, I am his friend and comrade, without further introduction."  Mark Twain 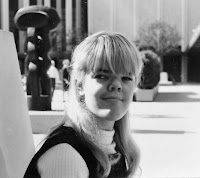 Few people in history loved cats as much as Mark Twain.  And if he were alive today, he'd probably be delighted to discover that June is "Adopt-a-Cat Month."  While a boy growing up in Hannibal, MO, and known by his given name, Samuel Clemens, he watched his mother adopt cats in June...July...August, as well as the remaining 9 months of the year.  While the Clemens family were of modest means, they were rich in cats.  Any neglected, homeless, hungry feline would find food and shelter with Jane Clemens. "Some people scorn a cat and think it not an essential; but the Clemens tribe are not of these," Sam would write later.

When Sam became the world-famous author Mark Twain, he filled his fanciful   Connecticut mansion with enough cats to delight his daughters and provide inspiration for his pen.  Then, as an old man grieving over the death of his wife, he adopted his daughter's black cat, Bambino, as solace for his grief and loneliness.  From his guardianship of Clara's cat, Mark Twain would learn how much he meant to his fans and readers. 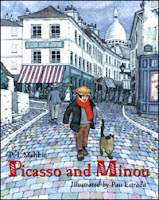 It was this last story about Mark Twain that intrigued me. I started to consider it as a subject for a children's story, exploring the concepts of loss, grief, friendship, and consolation.  I had been asked by my editor at Charlesbridge (Randi Rivers) if I would consider writing another children's story about a famous person and their pet.  Picasso and Minou had been released and it was time to think of a follow-up story.

As a cat enthusiast myself, it was easy to list several people who could fit this topic.  But Mark Twain seemed to be the ideal candidate.  He was my favorite author as a child and I continued to study his life and writings through high school and college.

At first I thought of a story about young Sam Clemens, who lived in Hannibal, Missouri with all those cats.  Did he really give patent medicine to one of his mother's darlings, providing the basis for the "Peter and the Painkiller" episode in The Adventures of Tom Sawyer?   But a quick search through cyberspace uncovered the Bambino chapter in Mark Twain's life.

In November 1904, a few months after the death of his wife, Olivia, Mark Twain moved into a  townhouse on New York City's bustling 5th Avenue.  With him were his youngest daughter Jean, their housekeeper Katy Leary, and "Bambino," a black cat that belonged to Mark Twain's older daughter, Clara.  But Clara was away in a sanitarium, trying to recover her health and strength after the death of her mother.  Until Clara was strong enough to return to her family, Twain would care for Bambino.

Shut up in his townhouse, Twain cut himself off from society, especially the press.  For years he had been one of the leading celebrities of the time and the darling of the media.  Anything he did or said could generate a news story and "Sam" loved being in the limelight.  But in the Fall/Winter of 1904-1905, he remained secluded inside 21 Fifth Avenue and refused to see anyone.

Then in the Spring of 1904, Bambino disappeared!  It was assumed that he jumped out of one an open window during spring cleaning, when rooms were routinely "aired out."  Where he went and why is the subject of speculation.  However, we do know that Mark Twain placed an ad in all the New York newspapers offering a reward for Bambino's safe return.  Immediately the story of Mark Twain's missing cat was picked up by newspapers all over the country.  For three days in April 1905 it was the human interest story everyone followed. 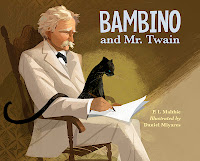 And while he waited for Bambino's return, Twain became the target of what amounted to something of a flash mob event.  Fans young and old brought their cats and kittens to their favorite author to comfort him until Bambino's return.  Now Mark Twain was willing to meet the world and thank his admirers for their concern.  And when Bambino did return home, there was a change in Mark Twain.  He would soon adopt the white "summer suit" as his signature attire and return to his public platform.

Did Bambino's mysterious disappearance and re-appearance really cause Mark Twain to re-connect with his public?  I would like to think so.  The good wishes of so many of his admirers had to lift his depression enough so he could return to the world again.

If animals could speak the dog would be a a blundering outspoken fellow, but the cat would have the rare grace of never saying a word too much." - Mark Twain

P.I. Maltbie is the author of Picasso and Minou and Bambino and Mr. Twain. She lives in Long Beach, California. Click here to watch a video book review of Bambino! 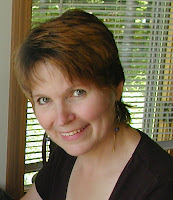 In 2002 the Maine Humanities Council, through their New Mainers Book Project, commissioned me to create a picture book about a Cambodian American family.

The task was a daunting one. "Who am I to undertake this," I wrote in my journal at the beginning of the process, "to presume the ability to know, to understand, to represent?" I knew that I couldn't create such a story myself, but I thought that if I immersed myself in the experience of Cambodian Americans and listened long enough, perhaps a story might come through me.

I read stacks of books detailing the Cambodian experience, nearly all survivor accounts. I learned from a specialist in torture and genocide about how trauma is repressed yet lodges as "shards of memory," evident in "a silence, a gap, an absence," and how that memory is often retrieved by the third generation. I looked at Cambodian art, listened to Khmer music, watched Cambodian dance.

And finally, I sat in the living room of my friends Veasna and Peng Kem as they graciously shared their own memories. They talked of their beautiful homeland, of the roses and hibiscus, the coconuts and mango trees, of favorite recipes and games, of family star-watching and the star stories elders would share.

Veasna remembered her own escape from the war, lost in a bamboo forest, fearing wolves and other wild animals, saying to herself, "I'm going to die here." She recalled praying to Buddha and to her ancestors for help. "Your parents are the ones you respect the most," she told me, "the ones who gave birth to you and took care of you since you were 'red' (a baby). They mean more to you, more than the big ocean. The spirit of my parents protected me."

Having gathering all of this, I waited. And waited some more. And finally one day, an image came, of a girl in a garden picking a tomato and a single yellow rose. 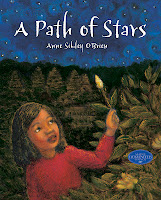 Ten years later, A Path of Stars (Charlesbridge) has just been released. In words and oil paintings, it tells the story of young Dara and her beloved grandmother, Lok Yeay, who escaped from Cambodia with the only two survivors of her family, one of whom would grow up to be Dara’s mother. Lok Yeay passes on to her granddaughter stories of the beauty of Cambodia and her survival and flight from her homeland, but when a loss triggers her traumatic history, Dara must use what she’s been given to help her grandmother heal. To my knowledge, it’s the only available fiction picture book about the Cambodian American experience.

The book's release has created wonderful chances to connect with Maine's Cambodian community, which numbers about 2000, including Portland's Cambodian Dance Troupe. Taught by a classical dance performer trained in Phnom Penh, the troupe includes sixteen girls, ages 4 to 20. Some are 2nd-generation Cambodian Americans whose parents escaped the Khmer Rouge; others were born in Cambodia and adopted by American families.

When I met with the girls in February, one of the ideas that struck me is that their identity is a relatively new one. Communities of Cambodian Americans, such as ours here in Maine, began taking root in the U.S. in the late 1970's. The oldest American-born Cambodians--in any significant numbers--are in their 30s. What it means to be Cambodian American is being defined now, in all its variety, by these young people, creating a brand-new, unique piece of the American mosaic. I look forward to the day when books about the Cambodian-American experience will be written and illustrated by the people who are living that story.

The book is also creating opportunities to connect the wider community to their Cambodian neighbors. In April I shared A Path of Stars with 3rd-5th graders in Westbrook, Maine, and Framingham, Massachusetts. The students then created Happy New Year cards with a drawing of a lotus and greeting in Khmer, which were mailed to local Cambodian temples.

This spring I'm helping to develop a project, "New Neighbors," to promote reading projects with children's books like A Path of Stars. Such books can spark conversations in which differences of language and culture, race and religion, can be explored through the lens of what we have in common--grandparents, family stories, immigrant journeys, special foods, love of the natural world. The "I'm Your Neighbor" website, currently under construction, will contain a list of recommended books and an evolving list of engagement materials for educators, librarians, and community organizations who seek to build bridges. (Sign up at www.ImYourNeighborBooks.org to receive email notification of the project launch.)

Anne Sibley O’Brien (AnneSibleyOBrien.com) has illustrated thirty-one books for children, fourteen of which she also wrote. The Legend of Hong Kil Dong: The Robin Hood of Korea won the Aesop Award, the Asian/Pacific American Award for Literature, and was named to Booklist’s “Top 10 Graphic Novels for Youth.” After Gandhi: One Hundred Years of Nonviolent Resistance, which she co-wrote with her son, Perry O’Brien, won the Maine Literary Book Award and was named an IRA Teacher’s Choice. She blogs about race, culture and children’s books at “Coloring Between the Lines” (www.coloringbetween.blogspot.com).
Posted by Charlesbridge Publishing No comments: