Listen to an interview with author Anne Sibley O'Brien on Maine Public Broadcasting.

Pass the Peace!
Posted by Charlesbridge Publishing No comments:

The Poems Are Told For You: Poetry and Parody in the Classroom 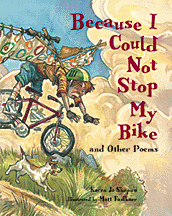 Parody has had a long tradition across many times and cultures. Lewis Carroll famously used serious, dry poems as fodder for clever parodies like "Father William." Many contemporary films and books for young people give a nod back to the plots and styles of Jane Austen (e.g., Clueless), William Shakespeare (Ten Things I Hate About You), William Blake (A Visit to William Blake's Inn), and Emily Dickinson (The Mouse of Amherst). In my children's poetry books Because I Could Not Stop My Bike and Other Poems and I Must Go Down to the Beach Again and Other Poems, I similarly transform classical works by poets such as Blake, Shakespeare, Dickinson, and Poe into poems with child-friendly themes like riding a bike, eating macaroni and cheese, and going tot he beach. In this way, I have tried to draw on the beautiful and varied rhythms and meters of famous poems while giving children of all ages a topic that they can relate to.

The benefits to children are several: most important of these, to ignite their interest in poetry by giving them poems they would love to read over and over. I wanted them to laugh and have fun, to be touched by a thought they may not have considered, or learn something new about their world. Each of my poems starts with an "apology" to the famous author from which the inspiration was drawn. I always intended the poems to work on two levels: to stand completely alone without any need whatsoever of the original works to appreciate the new ones, and yet also to have extra meaning for hte grownups and teenagers who were familiar with the originals. Like Sesame Street's "Letter B," "Cereal Girl," and "Monsterpiece Theater," the humor becomes multi-layered--both the actual rhyming story is funny (for children taking it literally) and the wordplay provides a bit of amusement for the grownups and older children who recognize the sources. 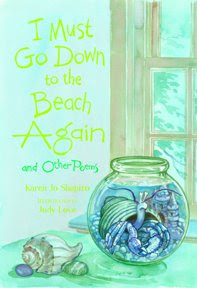 After a recent interview that I had on NPR's "Morning Edition" with Renee Montagne, I was surprised by how polarized some of the responses were to my having taken the classically great poems and changed their topics to ones of interest to children. Some responders were worried that these parodies represented a "dumbing down" for kids, and advocated reading the original works by the masters, even to younger children. Their "poetry purist" position seemed to indicate that playing around with poems suggests disrespect for the original authors. A popular educator bloggist, Miss Rumphius, countered with the following viewpoint:

"Since when is parody dumbing-down? Frankly, to parody well you need extensive knowledge of the original work. I think kids, particularly those in middle school could really exercise some poetic muscle by writing parodies of their own. I haven't seen the books (yet), but they seem like they might make wonderful mentor texts."

While I can understand that a poetry lover may be apprehensive that someone is playing irreverently with their favorite work, I must agree with this bloggist that a really good parody does indeed require a deep understanding of the author's style. As I wrote these poems, I began to appreciate the poets in a way that I never had before when merely a reader. It was as if I felt my way inside their way of making rhythm and rhyme, and in doing so, expanded my own skill and understanding. In fact, it was suggested to me by a theater professor at Guilford College that my poems are not really parodies at all--not in the definition of mocking or making fun of hte original work, not intended to spoof. "What I really think you're doing, " he wrote to me, "is taking the image patterns and meters of great poems and placing child-accessible thoughts in the poetic structure in the same way the more complicated thoughts are placed in the orginals... It gives the child a kinesthetic experience of the poem."

When authors engage with classical works in a playful and interactive way, they give permission for others to do the same. Literature doesn't have to be static. So long as we give the proper credit; a parody can show deep respect for a poet's talents even as it sings a silly tune. I have heard from teachers and librarians all over the country what a useful and fun exercise it is to encourage students to attempt writing "transformations" in their classrooms. Obviously this task will be easier for some than others, but all will emerge with a little better understanding about what poets are trying to do when they sit down to create. I don't like poetry that makes someone feel bad because they can't understand it. I want children to feel alive about poems--that they can act them out, laugh with them, sing them, or write their own. In my author visits to schools, I adapt activities from the poems across grade levels--from using puppets with first graders to engaging middle-schoolers in humorous dramatic readings of the poems, I have found that students can make a strong connection to poetry at their own developmental level. If they feel even a little more inclined to play with language, I have been successful. To that end, I leave you with a thought inspired by John Donne and which has become my tagline: "Do not ask for whom the poems are told/the poems are told for you." 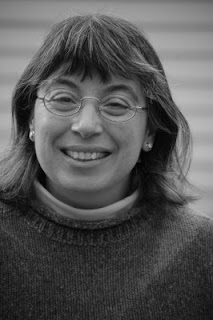 Posted by Karen Jo Shapiro, author of Because I Could Not Stop My Bike and Other Poems, and I Must Go Down to the Beach Again and Other Poems.
Posted by Charlesbridge Publishing No comments: