In That Enchanted Place 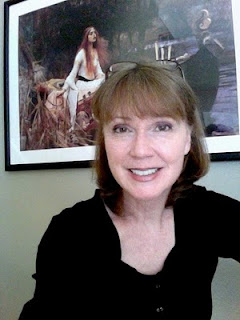 I have no memory of my parents reading to me. But when I was sick the aunt who lived downstairs would arrive at my bedside, noisily jolly with a kitchen chair in tow, to read a Dr. Seuss story. She favored the tongue-twisty types and feigned consternation and frustration over saying the right words in the right way and the right order. Her comical performance was generally limited to one read-through, though, and I was always left wanting more. How quiet the sickroom seemed when she was gone!

My first sustained experience of being read to didn't arrive until I was eight. In that long ago time, before parents thought to question a child's placement in school, the name of the next year's teacher was written in cursive at the bottom of the June report.

Quiet in school, eager to be good and do well, I didn't feel my future classmates' glee at our assignment when we left second grade for summer. Miss Flynn, you see, was known in Smith Street Elementary as the teacher who didn't believe in homework. That's the way the kids said it too. They didn't boast that she didn't give homework. The woman didn't believe in it!

In September Mildred Flynn proved to be mild and gray-haired with two routines that endeared her to me, neither of them concerning homework. The first was Oscar, the invisible flee she claimed lived in her hair. The second was circle time at the back of the room, when she read to us.

Oscar "appeared" whenever Miss Flynn held one hand out in front, palm to the ceiling. She talked to him and coaxed him to perform for us, her eyes following his movement as he jumped from one hand to the other with backflips and loop-the-loops. When occasionally he escaped during lessons, Miss Flynn walked up and down the aisles calling for him. Me, me! I'd think. Find Oscar in my hair! But no. Always somewhere else. Now a teacher myself, it suddenly occurs to me that Miss Flynn might have been recapturing straying attention. Clever lady! Perhaps it was a compliment to my attentiveness that Oscar never chose my head for his holidays, perhaps not. Back then, insecure child that I was, I could only wish for proof that she liked me. 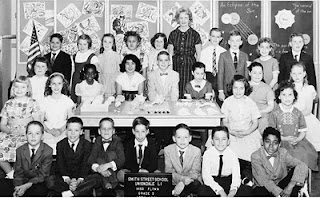 I'm standing in the back row, the third from the left.

The stories Miss Flynn read were about A.A. Milne's Pooh. She affected voices for each character--excitable Roo, timid Piglet, depressed Eeyore, pompous Owl and slow-thinking Pooh. (This was before their Disney-fication and, besides Miss Flynn's, the cartoon versions pale.)

"Christopher Robin was going away," began Chapter X of The House At Pooh Corner, IN WHICH Christopher Robin and Pooh Come to an Enchanted Place, and We Leave Them There. The last Pooh story. Little by little it became clear that Christopher Robin was leaving the forest and his childhood for school. Before she could reach the last lines, Miss Flynn was overcome with emotion. As she brushed past me on her way out of the circle, she pushed the book into my hands and told me to read the end out loud.

"So they went off together. But wherever they go, and whatever happens to them on the way, in that enchanted place on the top of the Forest, a little boy and his Bear will always be playing."

The magic of these words! The rapt attention of the room!--despite Miss Flynn's theatrical sobbing into a handkerchief in front of the chalkboard. I was hooked. I successfully begged the hearty aunt for my own copy of The World of Pooh (I have it still), and read out loud at home to anyone who would listen. The stories I began writing were, I suppose, gifts to Miss Flynn, Miss Flynn who loved stories, Miss Flynn who collected mine in a desk drawer and told me I might be published some day.

Others in the class began writing stories too, an assignment I don't remember being part of my education at that time or for years afterward. We did it for fun. Room 10 positively sparked with creative energy during free time. We bragged to each other: My story is three pages long! Mine is ten! Those with other inclinations created different gifts. I remember that Ronnie L. wrote pages and pages of numbers. He claimed to have reached incredibly high figures, happily ignorant of the fact that 1,099 is not followed by 2,000.

I went on to imagine my own Oscars too--like the elf in our living room cuckoo clock, who wrote letters to my younger sisters that my aunt allowed me to post with real stamps--and began to wonder if I actually could become a writer.

My first two books were published the same year that my son was born, and some of my favorite memories of raising Peter and, later, my daughter, Gemma, include sharing books out loud. I'm convinced it reinforced for them how to be still and listen, how to focus their attention and use imagination. I feel sure they absorbed sentence structure and vocabulary as well as a love for words. It was after hearing Rikki-Tikki-Tavi that Peter, at four, said with passion, "You have to teach me how to read!" 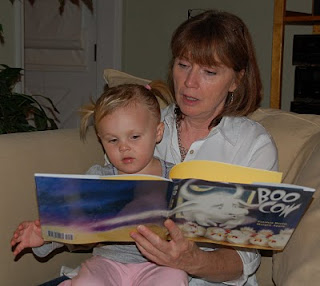 a narrator himself, reading books like Brian Jacques's Redwall to his sister. And today I am delighted to read to his daughter, Riley, when she comes to visit. At two, she will sit and listen for as along as I will read. "The end," she announces upon reaching the final page. "Read more, p'ease?"

I wonder how many other flames were lit by the sparks in room 10, torches to be passed along generations.

Justice for All: Some Thoughts on Character Education

The start of the school year is the perfect time to think Grand Thoughts, and few thoughts are grander than those in our pledge of allegiance. Just for fun, you might try to write a variation that emphasizes what is most important to you. Here is mine: I pledge acceptance
of the views,
so different,
that make us America

To listen, to look,
to think, and to learn

One people
sharing the earth
responsible
for liberty
and justice
for all.

Justice for all: this is a hot topic among children as young as two, as any parent or teacher who has heard "but that's not fair" knows well. What can we, as parents and teachers, do to make this world as just as possible for our children?

When my son was in second grade, his school experimented with "character beads." Children who were spotted doing something good during lunch or recess were given little beads that could be strung together to make a bracelet or backpack decoration. These beads were quite a hit. My son was so proud each time he received one. Even though you could buy similar beads at the store for a quarter each, buying them was clearly something only a child (or parent) of bad character would do.

There was an immediate school-wide spike in genuinely good behavior: sharing, holding doors open, cooperative play. But the savviest of students soon figured out clever and not-so-honorable ways to rack up the beads. For instance, my son complained that he saw a child drop trash on the playground about twenty yards in front of a friend who slowly picked up this trash in such a dramatic fashion that she managed to catch the attention of the recess teacher and earn a bead. He then saw the littering friend join the bead-receiving friend to celebrate. These girls will undoubtedly be billionaire junk bond brokers by the time they are thirty, having received an early and practical education in "how to succeed."

Children hear news reports every week that show the amazing and rotten things our leaders and celebrities manage to get away with. The message clearly is: do what you want, just don't get caught. Or, if you do get caught, say you're sorry, cry in public, and get on with your life. Bad deeds might cost you a job or a TV show, but people will forgive and forget sooner than you can spell
N-i-k-e.

What can we, as teachers and parents, do? How can we teach character education?

By setting aside time for children to think about it, talk about it, read about it, and write about it. "It's not fair" invites an experienced adult to respond "that's life," but we need to restrain ourselves and let our little victims of injustice have their say. As parents, we need to encourage our children to talk about the bully who got away with bullying, the cheat who got away with cheating, the liar who told a ridiculous lie and yet went unpunished.

As teachers, we are under constant pressure with all that we are supposed to teach during our time-constrained day. But let me ask you: did you become a teacher because you wanted to prepare someone to get high test scores and make a lot of money, or did you become a teacher because it is the best way that you can make this world a better place? Will you be proud to have educated a famous mathematician, if she turns out to be an unethical person?

This new year: how about setting aside some time each day for grousing? For talking about fairness and for teaching ethics through discussion or (real or fictional) unethical situations? 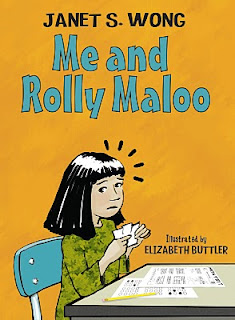 Three minutes at the end of the day: can you ask your children to jot down a list of the good or bad, fair or unfair, honest or dishonest things that happened? Would they be more eager to participate if you promised total privacy by allowing children to tear their paper into 100 pieces after writing this list of complaints?

Just a thought, a starting point for discussion. Ideas, anyone?


Posted by Janet Wong, author of Me and Rolly Maloo, a "hybrid graphic novel" ideal for grades 3-5 about a cheating incident--and the justice that follows.