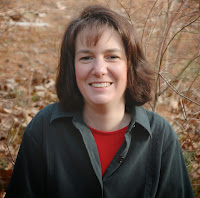 It was 1996. My first children’s book had just been accepted for publication, and I was headed to East Africa with a group of scientists to do research for a second book. Life was good—or so it seemed.

As friends and family heard about my success, I received a flood of phone calls. They congratulated me, of course. But they also asked some unexpected questions.

“So now are you going to write a real book? You know, one for adults.”

“It’s nonfiction? That’s great. But wouldn’t you rather write fiction?”

These questions confused me. They made me wonder and worry. Was I headed down the wrong path? Was writing for children a waste of time? Was nonfiction less important than fiction?

Luckily, my journey halfway around the world gave me the perspective—and the answers—I needed.

One night around a campfire at the edge of Tanzania’s Serengeti National Park, Ann Prewitt, an anthropologist and educator from the American Museum of Natural History, said she was fascinated by "aha moments"—seemingly small experiences that change the course of a person’s life. She asked the circle of scientists if they could recall such events from their own lives.

When my turn came, I described exploring a wooded area in western Massachusetts with my dad and brother when I was eight years old. As we hiked, my dad asked lots of questions:

“Why do stone walls run through the middle of the woods?”

“Why do sassafras trees have three kinds of leaves?”

“Why don’t chipmunks build their nests in trees like squirrels?”

He wanted us to think about our surroundings, and he knew a guessing game would be more engaging than a lecture.

As we reached the top of a hill, my dad stopped and scanned the landscape. Then he asked if we noticed anything unusual about that area of the woods.

My brother and I looked around.

We looked at each other.

We shook our heads.

But then, suddenly, the answer came to me. “All the trees seem kind of small,” I said.

My dad nodded. He explained that there had been a fire in the area about twenty-five years earlier. All the trees had burned and many animals had died, but over time, the forest had recovered.

Why was that an "aha moment" for me? Because I instantly understood the power of nature. I also realized that a field, a forest, any natural place has stories to tell, and I could discover those stories just by looking.

As the firelight flickered across the African savanna and I described my childhood insights, heads nodded all around me. I was among a new group of friends, kindred spirits who understood my fascination with the natural world.

They knew why I didn’t write fiction.

They knew why children were my primary audience. 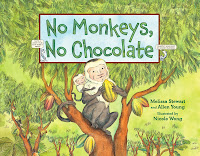 And suddenly, so did I. It was another "aha moment."

Now, 17 years later, I’ve written more than 150 children’s books about science and nature, including my newest title No Monkeys, No Chocolate (Charlesbridge, 2013). Some people still ask me why I’ve never written a book for adults. Others want to know if I’ll ever write a novel. But these questions no longer bother me.

I know that my personal mission, the purpose of my writing, is to give today’s children their own "aha moments" in the natural world—the same gift my dad gave me on that special walk through the Massachusetts woods.

Posted by Melissa Stewart, author of No Monkeys, No Chocolate. Visit her online at www.melissa-stewart.com.
Posted by Charlesbridge Publishing 1 comment: