ALA Midwinter in Boston 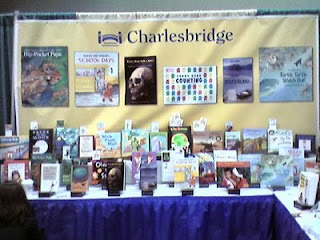 Don't call it Beantown. It's "America's Walking City" and it is our understanding that on Saturday, January 15th, you could walk around town quite comfortably during our January thaw. We wouldn't know. We were tucked away underground in the Boston Convention Center (the fairly new big boy of convention centers), enjoying the warmth of librarians.

While it may have been 40 degrees outside, it was hot in the aisles. And it was wicked hot ("wicked" is a popular word in New England that means "really, really"), at the Charlesbridge booth with authors like Mitali Perkins and Lynn Plourde signing.

At left is a photo of Mitali signing copies of the ARC of her upcoming novel, Bamboo People (July 2010). Notice Angus Killick and friends hovering Zelig-like for photo ops. 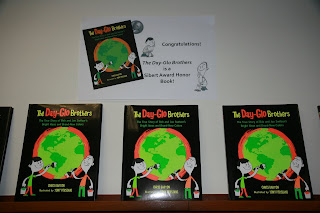 But the most exciting part of all -- as always -- was Monday morning and the awards announcements. This year Charlesbridge got to scream real loud (just like on Pee Wee's Playhouse). The Day-Glo Brothers by Chris Barton and illustrated by Tony Persiani, was named a Sibert Honor Book. Fantastic to be in our own backyard and to be able to have people in the hall to holler (despite the now-bad weather) because it's just sad when it's just the two of you. And what a great dollop of cream filling for a cupcake of a year for that most awesome of books.

Speaking of cupcakes... whenever anything remotely good happens at Charlesbridge -- a book wins a major award, someone has a baby, a brand new episode of Lost -- the staff at the Bridge tends to celebrate. Never met an office-full of people so ready to stop, drop, and gather in the conference room for some chips and dip. Or, in this case, Day-Glo cupcakes. With champagne (surprisingly not a bad combo). There was orange juice for mimosas for those that don't like their alcohol straight up first thing in the morning. We're "rock stars", not rock stars. 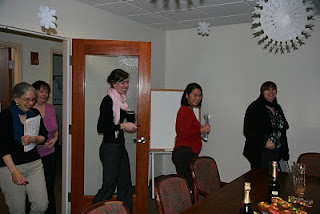 Look at them all ogling those tasty cakes. Wait, now, everybody. You'll be told when you can dig in. 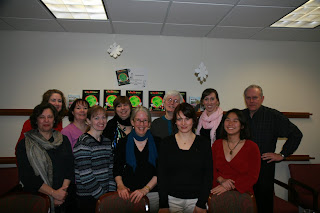 At left, the creative team, who put the "day" in Day-Glo. The uncreative team toddled off to seek out more cerebral pursuits. 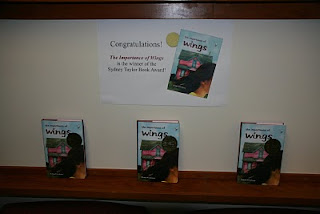 And MORE good news! The Importance of Wingsby Robin Friedman is the WINNER of the Sydney Taylor Book Award. Congratulations, Robin! Well-deserved.

"[A] voice that is both sardonic and sincere..."
- Kirkus Reviews


Find out more about The Day-Glo Brothers and The Importance of Wings at www.charlesbridge.com.
Posted by Charlesbridge Publishing 1 comment: 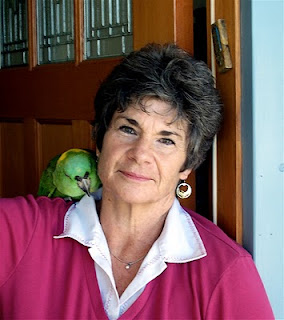 dition. Love. The family of our heart as well as of our blood and bone.
These are what motivated my to write my picture book, What Will You Be, Sara Mee? These are what made and continue to make me want to share my experiences with others.

Family...
When my daughter, whose name really is Sara Mee Jung Kim, arrived at the San Francisco airport from Korea on September 14, 1984, she was exactly, to the day, fourteen months old. Our whole family was there, waiting for the plane to land--all watching out the big window toward the runway. I walked down a long corridor to the door of the 747 jumbo jet. When the escort placed Sara Mee in my arms, she was wearing a light green terry cloth sleeper. And she was crying. I spoke gently to her in Korean, Mee Jung ah, ool jee mah. She stopped crying instantly and looked up at me with a big smile. I carried her back down the long corridor where the rest of her family--Daddy, big brother, Grandma and Grandpa--met her for the first time. There was a lot of hugging and crying, crying and hugging. The story of our life together as a new family had begun. That story, like any story, has had many chapters. Joyful chapters. Funny chapters. Suspenseful chapters. And tragic, sad chapters. But all the chapters tell a story of love that has been enriched by sharing a diverse wealth of... 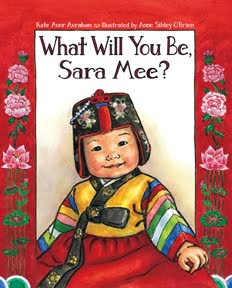 We were one big multicultural family even before Sara Mee's arrival. A joyful, eclectic blend of European, Celtic, Ashkenazi Jewish, a bit of Native American. When I was in high school, Mariko, an AFS exchange student from Japan lived with us for a year. She and her family became a part of our family and added many more rich traditions and, to date, over forty years of sharing stories and visits, one continent to the other. We celebrated pretty much everything throughout the seasons. With Sara Mee's arrival, Korean culture and customs were woven into the cycle of our lives. Even though she was just past one year old, we decided to have a "Tol," the ritual first birthday celebration featured in What Will You Be, Sara Me? Our dear Korean neighbors, the Yees, helped us plan the Tol and prepare for the Toljabee, prophecy game. Just like in the story, we invited friends and family and neighbors. Just like in the story, everyone ate and talked, laughed and gathered to see what Sara Mee would be. Should I tell what symbolic item she chose? What her prophecy was? No, I think I'll let everyone wonder and only hint that though my story is based on real experience, it is also fiction. And, it is autobiographical like most stories are at least in part. Within its pages I have been able to immortalize my daughter and my son, to continue their sibling relationship even though he died long ago. Story. Story is forever. And so is love.

Story...
I have been writing as long as there was paper and pencil or crayon or pen available to grab onto. Recently, I found several of my childhood books that have illegible pencil scrawl under the printed lines. I was writing or maybe re-writing all those years ago! I wonder if revision was easier then. It is most assuredly the hardest part of the writing process for me now. The writing process itself is very thrilling, especially when a new idea kindles my thinking, or characters come alive and seem to be telling the story themselves. Story. And poem. And song. Discovered within the stories and poems and songs I have lived and heard.

Oh, and words themselves. Words and writing are a passion, an essential endeavor I "can't not do." I want to give this passion to the young, encourage them within this fast-moving, technological era, to keep listening and writing and telling the diverse stories of their world, their families, their traditions.

Happiness to all, whatever your prophecy may be.


Posted by Kate Aver Avraham, author of What Will You Be, Sara Mee? available February 2010.