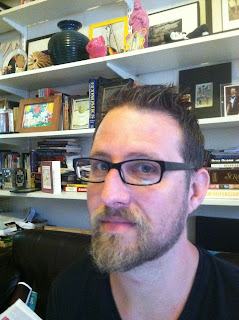 As a young reader, my tastes often tended toward the macabre, fantastical, and horrifying—I probably started reading Stephen King before I should have. Books were an opportunity to keep myself up at night—even after the lights were off and the books were closed, I’d lay in bed awake, my mind replaying over and over a slideshow of the startling images I’d just absorbed. Though I was also a sucker for classics like Charlotte’s Web, The Outsiders, and Mrs. Brisby and the Rats of NIMH, it was always the scary stories that I tore through the quickest. And the scariest stories, to me, were always the ones that seemed the most real. Or the ones that were, in fact, based on real events. For me, a terrifying event—an out-of-control factory fire, an earthquake hitting a city, a terrorist attack—inherently contained more horror than any fictional story featuring vampires, zombies, haunted houses, or masked madmen with a knife ever could.

I was in sixth grade when undersea explorer Bob Ballard discovered the wreckage of the ship Titanic two-and-a-half miles below the surface of the North Atlantic in 1984. My English teacher passed around the new issue of National Geographic, which featured on its cover a ghostly blue image of the ship in its watery grave, taken directly above it by a roving remote-controlled deep-sea film camera called Alvin. Then she passed out a photocopy of an article that gave an overview of the Titanic tragedy: that it was the biggest and most luxurious passenger ship ever built and was proclaimed to be “unsinkable”; that it hit an iceberg on its maiden voyage from Southampton, UK, to New York City in 1912 and sank, taking 1,500 passengers with it into the freezing water; that, though it carried a total of 2,224 passengers and crew, it only held enough lifeboats for 1,178; that its list of passengers included some of the richest people in the world; and that the majority of those lost on the ship were the third-class passengers, mostly immigrants, who were stuck below decks without a fighting chance to access the limited number of lifeboats on the main deck.

Paging through the National Geographic—with its full-color photographs of the wreckage two-and-a-half miles below the surface, its timelines of the tragedy, its diagrams and drawings of the gash in the hull the iceberg had made—I was transfixed by the sheer horror of what all those passengers­­­­—those who lived and those who died—must have gone through on the night of April 14, 1912.

I became obsessed with the story, and started tracking down any books out there that told it. I scoured my local library, uncovering a few titles—The Story of the Titanic As Told by Its Survivors, by Jack Winocour from 1960, The Odyssey of C.H. Lightoller by Patrick Stenson from 1984, and, of course, Walter Lord’s classic from 1955, A Night to Remember—and read them with eyes wide and a chill running down my back. The stories collected in the pages of these books were horrifying, even more so for being true. These were real people, lucky enough to have secured a place on Titanic’s maiden voyage across the Atlantic, and, four days after departing Southampton, unlucky enough to be fighting for their lives amid the wailing of people drowning, the horrible creaking and groaning of the massive ocean liner as it surrendered to the sea, and the dark, earsplitting chaos that would only subside after the ship had disappeared under the water and almost 1,200 lives had been snuffed out.

Tales of terror from our history have always drawn me in, whether they took place during the Civil War that gave rise to countless battlefield horrors, the Gilded Age that produced the Titanic, or the Great Depression that birthed dust storms on the Great Plains that suffocated thousands and turned the sky black. So when I was approached by Hilary Poole, the editor and creator of the Horrors of History series for Charlesbridge, about writing a book for young readers about the Galveston hurricane of 1900, it seemed like the perfect project for me to take on. Even though I was a little nervous about writing for a young audience for the first time, I was excited at the prospect of researching and writing about an event that had been largely forgotten—much like Titanic had mostly disappeared into the mists of history until Bob Ballard’s amazing discovery reignited interest in the story of the doomed ocean liner. I wanted to bring this horrific bit of history to life for the hungry young readers I know are out there, since I once was one.

The hurricane of 1900 remains the deadliest in American history, and it changed the trajectory of the island city of Galveston forever. For my book City of the Dead, I plumbed survivor accounts, newspaper articles, historical records, and local archives to bring to life various Galvestonians’ experiences during this storm that hit on September 8, 1900, and killed 6,000 to 8,000 people, nearly one quarter of the city’s population. I discovered amazing stories of survival, heartbreaking accounts of bravery and sacrifice, and jaw-dropping details of the merciless violence of Mother Nature at her worst.

I was particularly gratified to be able to write about the Sisters of Charity orphanage, which sat just a little ways from the beach. The story of the child survivors is truly astounding, and City of the Dead represents the first time their accounts have been dramatized in an historical novel.

City of the Dead is dedicated to the people of Galveston who suffered this tragedy. It is my hope that it will ignite in young readers not only an interest in exploring the frightful and awe-inspiring stories of death and survival in Galveston in 1900, but also a desire to start their own searches into the countless amazing and spine-tingling true tales from our country’s past.

Posted by T. Neill Anderson, author of City of the Dead, the first book in the Horrors of History series. This is his first book for young readers, and one that he wishes was around to enlighten (and terrify) him when he was a kid. T. Neill Anderson lives and writes in Brooklyn, New York.

The Horrors of History series commemorates horrific, life-changing events in our nation's past. Each novel combines thorough research, first-hand accounts, and fictionalized characters and scenes to make history accessible to young readers. The results are gripping tales of devastation and bravery, made all the more intriguing by their foundation in real-life events. Stay tuned for the February 2014 release of Ocean of Fire: The Burning of Columbia, 1865, which details life in the South at the end of the American Civil War through the retelling of the fire that swept through Columbia, South Carolina, after the city surrendered to General Sherman’s Union troops.

Author Anna McQuinn shares LOLA AT THE LIBRARY and other stories with the children of Chicago. Read about her visits to the Chicago Public Library, Lurie Children's Hospital, and ALA on her blog.