A Poet Makes A Laughing Sound 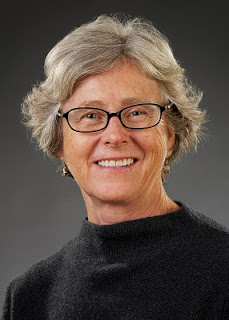 In honor of National Poetry Month I would like to write a bit about how my poems come to be. I have always loved words, and I have written poetry since I was fairly young. I remember writing poems in fourth grade, probably my first conscious attempt to be a writer. I think they were about horses.

Here is a poem I wrote in high school that got published in our literary magazine:

Deep, dark, damp, and dank
Smooth stone on smooth stone;
Hollow cylinder, receptacle of Earth's tears.
Hairy beard so sopped with ooze
Dripping, dripping, dripping, dropped.
Ringed rings rolling, rolling
Strike the mossy walls with silence.
Deep, dark, forgotten, lost;
Stones of earth laid by man
Worn and worn and worn again,
Cold, rejected, forgotten, hidden
at the base of trees' naked roots.
Home of rat, spider, and dead mole.
Dripping drops of liquid rock
Dark, forgotten cylinder, receptacle of Earth's tears.
Reading this poem now it reminds me of how much I like the feel, the taste of words. I must have just discovered alliteration as a poetic device. I wrote with rhythm, and I was thinking in images. My poems today are not a whole lot different--I look for rhythm. I taste the words and feel the flow of the words physically as I write them. I think about images.

The poem "The Robin Makes A Laughing Sound" grew out of a walk. I was walking home on a March evening, listening to the bird sounds. A funny noise, soft, yet sudden, made me stop. It reminded me of my neighbor's guinea pigs, the sort of noise they make. I looked around and spotted a robin. I began to think about how to describe the sound the robin had made. This was not its song. This was a kind of call, perhaps a warning. The best I could come up with was a laughing sound. "The robin makes a laughing sound. " Those words fit with the rhythm of my walking. By the time I walked all the way home I had four lines, the beginnning of a poem:

The robin makes a laughing sound
Reminding me to look around
At buds on twig tips swelling big
And swelling worms which robins dig.

The words came naturally as I thought about what I had just experienced. I wrote them down in my journal.

A few days later I came back to the idea. More lines came to me as I revised my first thoughts:

Sparrows in a privet hedge--

Seagulls like dumps and garbage and hang out at the mall

About here I realized I was getting sidetracked, but I had found a rhythm I liked. So I abandoned the last four lines that digress from the idea of the robin. My poem was almost complete. I had circled the two uses of the word "nice" in my journal. Nice is a pretty generic word unless you are trying to make a point about the word nice. What kind of branch would a robin like? What kind of ledge? Also, the line "Swelling buds on twigs of trees" seemed difficult to say out loud.

Here is how the poem looked when I submitted my manuscript:

The Robin Makes a Laughing Sound

The robin makes a laughing sound.
It makes me stop and look around
To see just what the robin sees--

Fresh new leaves on twigs of trees--
A strong high branch on which to rest--
A safe, dry ledge to hold her nest.
The robin makes a laughing sound.
I always stop. Look around!

My poem was almost complete--there were just a few editorial changes: the punctuation was changed to make the poem easier to read. And the last line shifted slightly. Instead of ordering my reader to look around, I kept the line within my own experience--"I stop. I always look around."

The Robin Makes a Laughing Sound

"The Robin Makes A Laughing Sound" took only two drafts to reach its essential shape. Other poems were harder to get at.

I liked the line and the idea of seagulls hanging out at dumps and malls. I live in the Midwest, near Lake Michigan, but 1,000 miles from the ocean. Yet I see gulls all year round. I see them most often when I drive down North Avenue, past mall after mall. The gulls are everywhere, perching on street lights, soaring over the parking lots. Why are they here? I began to think about my experience with gulls. Gulls are hard to identify so I used the not quite proper term "seagulls" which encompasses many different species. I wanted to emphasize how out of context the gulls seemed. This was one of my early drafts:

Seagulls like dumps and garbage.
They hang out a the mall.
There is no ocean here for a thousand miles.
But there are lakes an rivers that run to the sea.
And garbage and dumps and malls.

Seagulls make loud noises--
They're not shy. They are the teenagers of birds--
Showing off, making noise,
Traveling in packs. But always competing.
Just like the boys in junior high who hang out at the mall.

One reader suggested that I concentrate on the secon stanza and develop the idea of seagulls as the teenagers of birds. Although I like the idea of gulls living so far away from oceans, I felt it was a good suggetion for bringing some unity to the poem. Here is the version that I submitted in my manuscript:

Seagulls are the teenagers of birds.
They hang out at he mall,
Scrounging for French fires and scraps of burgers.
They laugh. They swoop. They're not shy.
They travel in packs, squawking, playing at tug of war over crumbs,
Just like the boys from middle school,
Who hang out at the mall.

I like the poem and I really liked the comparison of seagulls to kids, but I felt the poem was too literal, too direct, lacked style. I continued to work on it as the book went into production. My "ah-ha" moment was when I realized that I did not need to tell the reader that seagulls are the teenagers of birds--the poem shows that comparison through it's actions. So I dropped the first line and opened with the second. I played with the order of the lines and images until I had simplified the poem. My editor suggested that all the verbs used should be able to apply equally to kids and birds, so "swoop" was out. "Strut" replaced it. The final suggestion, which I am still second-guessing, was to eliminate the last line. It has a repetitive, plaintive note that I like and that my editor and my writer's group felt was unnecessary and did not contribute to the poem. I still miss it.

Seagulls hang out at the mall.
They laugh. They squawk. They strut.
They're not shy. They travel in packs,
fighting over french fries
and scraps of burgers--
just like the kids from middle school. 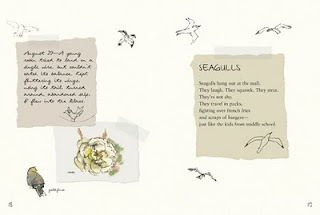 What do you think? Should this poem end with the lines "just like the kids from

middle school/who hang out at the mall."?

Posted by Sallie Wolf, author/illustrator of The Robin Makes a Laughing Sound.
Posted by Charlesbridge Publishing No comments: