Cars on the Carpet

Experienced nonfiction author Jan Adkins discusses going from playing with cars on the carpet to drawing cars on the page, and why he chose to write about Bertha Benz.

KIDS WILL ALWAYS PLAY CARS ON THE CARPET, driving along the woven patterns like streets, traveling to mystic places carrying amazing people. When I wrote Bertha Takes a Drive, about the very first car trip, I could see it all in my mind, as if I were pushing a tiny tin version of the strange, three-wheeled Benz Motorwagen along a carpet woven with the map of Germany: out of Mannheim, across the Rhine River, south through Heidelburg to the Black Forest, toward Grandma Ringer’s house in Pforzheim. I was with them in my kid’s play-mind. Lucky grownups don’t lose that ability to shift between the “real world” (whatever that is) and the “what if” world. 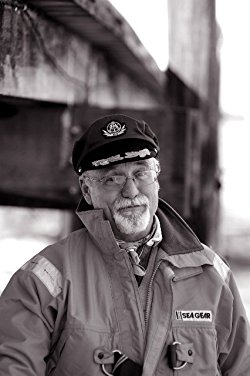 But my grownup historian’s mind sometimes interrupts carpet play, asking me how automobiles have changed since I was a kid. The car in my driveway is an engineering leap from the cars I first met. 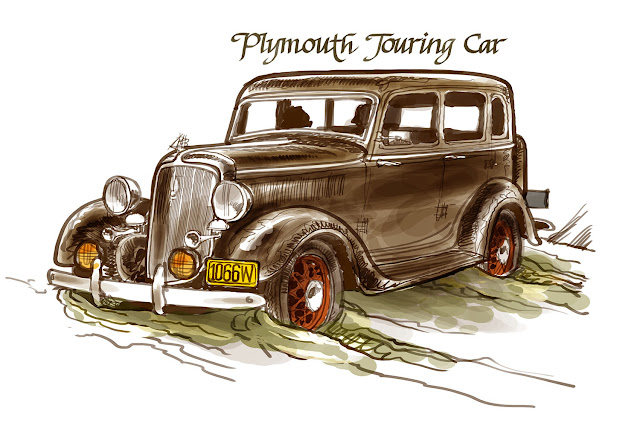 I must have been four when I rode in the wonderful back seat of my Grampa’s Plymouth Touring Car (it had fold-down “jump seats” for extra passengers!). It was summer. We had started from Wheeling and were driving to the family’s camp cottage in the mountains of northern West Virginia. We had left paved roads behind us when we passed the Boy Scout’s Camp Agaming, so a plume of dust from the dirt roads followed us, the color of brown paper. The road was rough and the Plymouth’s springs were tight, and I loved the bumpy ride because we weren’t on smooth city paving, we were far away in the hills! We passed the Sand Hill Church and began our descent to Big Wheeling Creek on switchbacks – back and forth curves that made the road less steep. At one point Grampa beeped his horn three long times. Gramma told me my uncles and aunts far below us at the camp would hear it from this switchback.

The road leveled out at Viola, not so much a town as a place where two road met. One crossed the Creek on a steel bridge. We took the other along our side. Grampa slowed his Plymouth just before Turkey Run, a stream that ran into the Creek, and I leaned far out the window with my Grandma holding my belt, because we forded the stream – drove through it, its rush of hillside water humping up and swirling around the tires almost to the running boards, a flat step just below the Plymouth’s doors that almost no modern cars have. I loved fording Turkey Run! Up and out of the run, we rumbled along hard-packed dirt road for a few more miles before we reached the camp, where my uncles’ cars were parked and my aunts were fixing lunch at the big table covered with red-checkered oilcloth. Bertha would have enjoyed that ride along with me. 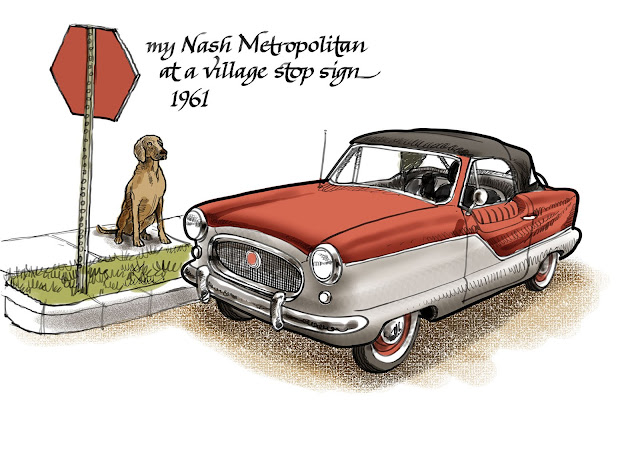 My historian’s mind also called up the first solo car trip I made, when I was sixteen. I drove from our home in St. Clairsville, Ohio, to visit a friend in Columbus, Ohio, in the middle of the state.

Today, this is less than a three-hour drive. In 1961 it took four or five hours. Today, the trip would be seamless, on Interstate Highway 70, a high-speed run smoother than the water rushing down Turkey Run. But then I traveled National Road Route 40, which went through every town along the way. I stopped a hundred times at stop signs and traffic lights, occasionally nodding or waving to someone walking the town sidewalks eight feet away. Men cut their lawns with loud mowers and the smell of mown grass drifted through my open windows. At a village red light I might stop beside a grocery with sidewalk vegetable bins and smell the rich dirt smell of potatoes or the bouncy fragrance of strawberries in red-stained thin wooden baskets. I got a burger and a shake at a drive-in diner where the waitress clamped a serving tray on my car door. There were hitchhikers, tractors making slow progress from one field to another, dogs, and always roadwork with a crew repaving a pothole beside a tar boiler and its deep, black, piney smell. Banners over village streets announced local fairs and festivals. Hundreds of little billboards stood beside the roads advertising local things. There were still Burma-Shave signs! They were all over America, each a series of five small roadside signs, four that rhymed, and then the final word: Don’t lose your head / To gain a minute / You need your head / Your brains are in it! / Burma-Shave!

My 1961 trip to Columbus connected me to towns and townspeople, things happening outside my life. Today’s trip is smooth, fast, and solitary. It no longer reminds me of an apple cider festival or a special on local green beans or anything beyond the little circle most of us scribe around our lives. But isn’t that what we were playing at, driving on the carpet? Weren’t we imagining distant destinations beyond our little circle? Didn’t we want to reach mystic places and new people outside our lives?

I believe Bertha would have understood and enjoyed my trip with Grampa and Gramma to Viola. I think she would have been fascinated by my trip to Columbus through small towns in Ohio. I wish I could share those trips with her. A slick, fast superhighway trip sealed in an air conditioned car would not, I think, delight her. 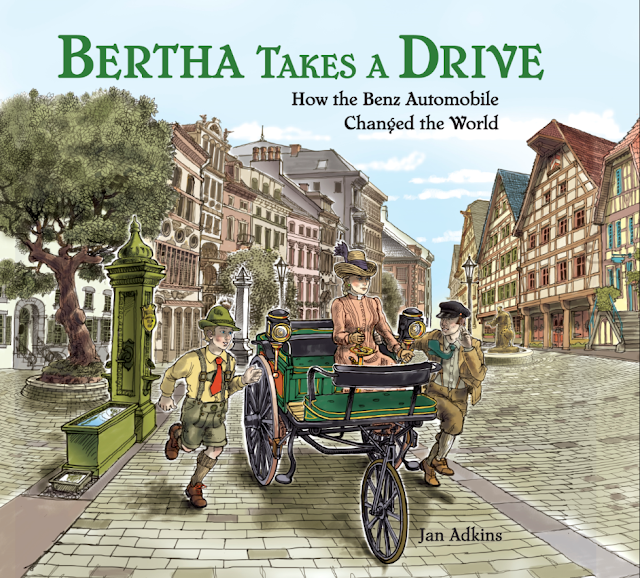 Purchase Bertha Takes a Drive: How the Benz Automobile Changed the World for your readers today!
Posted by Charlesbridge Publishing