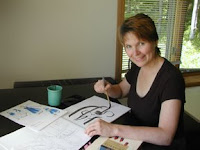 The email invitation came in June: Would I come to camp for a week in August? The inquiry was from the director of , which brings Korean adopted and Korean American children to a campground in northwestern , where they get Korean language, crafts, music, martial arts and cooking along with their swimming, games and summer fun. The director had found my Korean hero book, The Legend of Hong Kil Dong, and heard that I had grown up in : would I bring my book and my background to share with the campers?

I accepted the invitation to be an author-illustrator-in-residence for the week, running workshops for campers ages 7-11. My task was to design daily book-related activities that would promote self esteem. I decided to have the kids make identity books -- collage scrapbooks of images and writing.

In good weather, which was most of the week, my classes gathered around tables in an outdoor roofed pavilion next to the swimming pool. Each child was given a square sketchbook as the base for their art and writing, and there were all kinds of art supplies. We brainstormed group lists about what was great and what was challenging about being Korean, being American, being bicultural and/or being adopted. Each day I introduced a visual idea for the children to use as a takeoff point for their own creations. One day we focused on Korean symbols, another day we drew mythical tigers and dragons based on folk art paintings, or made collages from piles of photographs of traditional and contemporary . My goal was to expose them to as much Korean-ness as possible – in the form of images, symbols, ideas and stories – and allow them to select what appealed to them. (I knew that, living in this country, they were immersed in American-ness every day of their lives.) I wanted each camper to have the time and space to reflect on what it was like to be a person with dual identities.

Each day I also shared a Korean story. These included my book and drafts of folk tale retellings that I’d never pursued to publication. I was struck by the response. The kids went quiet, even the most hyperactive and rambunctious listening with rapt attention. In their slightly unfocused eyes, that hazy look when the mind is deep in an imaginary journey, I saw that the tales fed a hunger, and was reminded again of the power of stories for children.

The week culminated with a readers’ theatre presentation of my book that included live drumming, Tae Kwon Do demonstrations, and a part for every child. It was like watching the book come to life. Afterwards, copies were available for sale and signing.

Going to camp was invigorating, rewarding and fun. I certainly sold some books, but far beyond that, my book – and I - became part of the campers’ lives. I’ve already signed up for two Korean culture camps for next year. 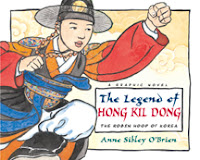 This was a great posting to read, and it sounds like the week at camp was delightful for both the children and the author/illustrator. I have heard much about the story, The Legend of Hong Kil Dong.

I taught English to many Korean children living and studying in Canada. Based on my experience of teaching them, I wrote a picture book which I am trying to get published. Reading this posting was most inspiring.
Barbara C. Burgess