Around the World in 114 days

It was a mild January afternoon in 2007. My husband Bill and I were rocking on the front porch, enjoying the last rays of a sunset when he asked, “When is your next book for Charlesbridge due?”

“I’m just beginning the sketches for Plant Secrets and final art is due in November,” I replied.

He asked what my schedule was after that. I told him I had quite a while before my next project. I looked at him quizzically and said, “Why do you ask?”

“Our fortieth anniversary is next year. How would you like to spend it in ?”

He then said it would take a while to get there. In fact it would take months! He was proposing we go on a four month around-the-world cruise. I could hardly wrap my mind around such a possibility. I’m the type you might describe as a homebody. I love the life we are enjoying since my husband’s retirement and subsequent move from to an island on the coast of . I have a fabulous art studio where I write and illustrate children’s books, paint landscapes, pet and people portraits, and teach an occasional art class. Not to say I don’t enjoy travel. We have done quite a bit over the years, but never much longer than two weeks. As an artist and writer I had to consider the insights and inspiration such a life altering experience would offer. To Bill’s delight, I found myself saying, “Why not!"

On January 4th we boarded the ms Amsterdam in to begin ’s Golden Anniversary Odyssey, World 2008 Grand Voyage. Our first stop was , where I visited a butterfly farm while Bill snorkeled. We continued on to , then into the . My engineer husband was fascinated with the complexity of the locks. 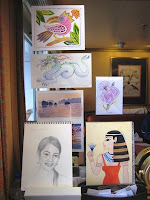 During eight days in the Pacific we enjoyed ship life, lectures, shows, learning Tai Chi, making friends, and I even worked on sketches for my next

book. Finally, “Land ho!” The South Pacific islands like, Tahiti, Moorea, and were enchanting. The people were friendly and happy with their simple life style. I did a drawing of a lovely young girl in . It is easy to see why so many artists and writers found inspiration in these tropical paradises.

We were anxious to get to our four ports in . From the rolling hills of sheep farms, and

the incredible seal, albatross and gannet colonies along the rocky shores, to the spectacular Fiord Lands, it did not disappoint us.

Our itinerary included three ports in . Since many of my books celebrate wildlife, I enjoyed the variety of weird animals like the Tasmanian devil and wombat.

Continuing on to , I particularly liked where it seemed everyone was an artist. In , which is part of , I entered our first mosque, with headscarf, bare feet, and in a modified burqa! 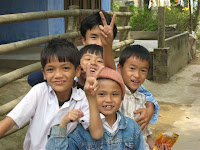 Although Hong Kong and are a shopper’s delight, I preferred ports where we could mingle with simple people. For that reason I loved . My fondest memory is of the happy children in a little village next to a rice field. They were anxious to meet us and practice some English words. A young father brought his baby out to show us.

was a study in contrasts of modern and ancient, rich and poor, but always colorful and vibrant. We visited Hindu and Buddhist temples in Chennai and viewed an immense open air laundry in Mumbai.

and brought us back to Biblical times. It is impossible to describe the immense impact of the pyramids and tombs of pharaohs. I have always been in awe of the sophistication of art and architecture in past millennia.

I can’t mention here all our ports, but we traveled through the Suez canal, into the Black Sea, to Sochi, Russia (where I practiced the li 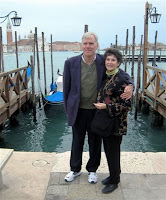 ttle bit of Russian I knew) and Sevastopol, Ukraine, Istanbul, Turkey, Santorini, Greece, and finally to Venice for two days to celebrate our 40th in a romantic city. I had studied art in in my senior year of Rhode Island School of Design, so is very special to me.

After and , our Atlantic crossing was calm and relaxing and a time to reflect on all that we had seen and look at our thousands of digital photographs. As we entered the sun was rising behind the familiar skyscrapers. Lady Liberty’s glowing torch welcomed us back. We had been a speck circumnavigating this wonderful blue-green globe suspended in the vast universe. We were Americans, but now felt like citizens of the world. 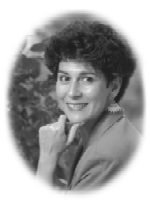 you have had an amazing voyage - were you inspired to produce a book for young readers?

Hi, Phyllis -- This is the author of PLANT SECRETS, and I'm happy to think my book was the last project you were working on before you took this marvelous trip! I've been meaning to write and say thanks for the wonderful illustrations you did. I'm so happy whenever I think about the book. -- Emily