The Recipe for an Ocean Soup 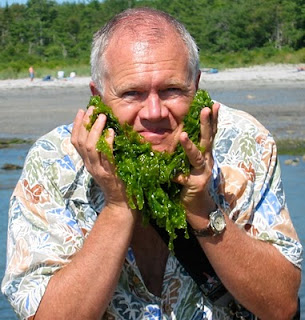 Once a park ranger, always a park ranger. Fresh out of college, I worked as a National Park Service ranger. I loved "teaching" or interpreting natural history to park visitors.

One August almost ten years ago, our Vermont family piled into our beat-up Toyota Previa van and drove the six hours to the coast of Maine. We landed in a tiny coastal harbor in a village called Blue Hill. The rental cottage overlooked a narrow tidal inlet. We would be there for the week. E.B. White, the author of many books including Charlotte's Web, Stuart Little, and Strunk and White's Elements of Style, lived in Brooklin, Maine, just up the road.

The tide pools at the edge of this little Maine cape would provide the inspiration for one of my children's books many years later. A half-mile section of tide pools spanned our front yard, less than 100 feet from the deck of the rental house. At low tide, mid tide, and high tide, I would go exploring. I'm a Vermonter. We have no ocean. So this was like Disneyland for a naturalist. 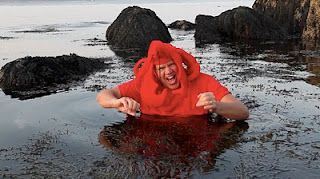 I'd often take our two daughters, Hayley, 12, and Devon, 10, to investigate the pools. We'd creep over the rocks and peer into the still water. The life in the quiet, salty pools fired my imagination. It was like looking into someone's living room. Everyone was home: anemones, barnacles, starfish (now called sea stars), crabs, sculpins, sea urchins. For five days I watched their comings and goings, prying into their private lives. I scribbled notes. I took photographs. I stayed long after the girls got bored. I'd studied tide pool ecology in a Field Biology course in college a million years ago, so this felt like meeting up with old friends.
As a writer, you have to be ready for inspiration when it shows its face. We returned 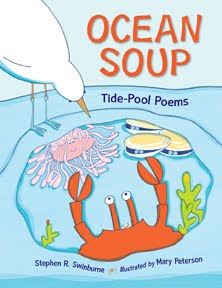 to Vermont, shook the sand out of our sneakers, and stored our beach gear in the barn. And then every morning for the next two weeks I woke at five, went to my desk, and wrote poems about tide pool creatures. I browsed field guides. I stared at the shells we'd collected. Sniffed the salty carcass of a sea fan. And with the promise to myself that I would keep B.I.C (Butt In Chair) until I had written something, I began to hear the voices of the tide pool inhabitants.

I wanted Ocean Soup to work on two levels: poems that were entertaining and educational, and solid factual information that would enlighten and expand awareness about a beautiful and threatened habitat. Besides a glossary and further resources to explore, I wrote brief factoids about each critter.

I don't know exactly how and when Ocean Soup became poems rather than straight nonfiction text, but the writing emerged as poems right from the start. And I knew that they had to be funny. I wanted the creatures to speak for themselves. A starfish with attitude. A sea urchin proud of its spines. A blue mussel tired of being pushed around. I envisioned the sculpin first as Fagin in Oliver! and I just knew that Hairy Doris, a sea slug, was Mrs. Doubtfire. 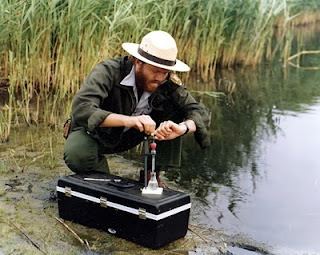 ortly after completing the book, I began "performing" some of the Ocean Soup poems in conferences around the country. They were so well received, I thought there might be an opportunity to take it further. During a conversation with my savvy and tech-loving nephew, an idea was born to videotape me performing the poems in an actual tide pool. So on a warm weekend in late August, we drove three hours to Odiorne Point in Portsmouth, New Hampshire.


The filming of the Ocean Soup videos was a total blast. My wife, Heather, held the cue cards and boom microphone and 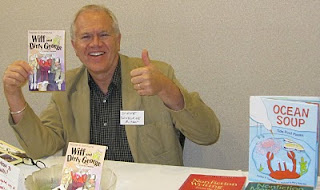 my nephew, Sasha, filmed the action with an HD digital camera. I dressed as a pirate, and English school boy, a well-endowed hussy, a nightclub performer. I poked around thrift shops and found a dapper white and blue seersucker jacket. We filmed in morning and late afternoon light. The staff at Seacoast Science Center were a great help suggesting locations to shoot and even providing us with some "tame" tide pool critters.

I feel like this book, these poems, have taken on a life almost all their own. I love Mary Peterson's colorful and playful illustrations. They complement my text perfectly. And to cap it all off, I'm very proud of the dynamic and whimsical website we've developed at www.oceansoupbook.com. So from the first time I peered into a marine tide pool all those years ago, to the creative energies I poured into the writing, performing, and promoting of the tide pool poems, what a long, fun trip it's been.