Live from the Tower of London: Queen Anne Boleyn 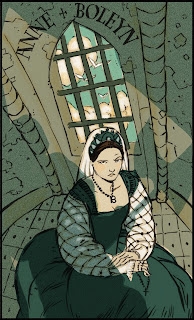 Strange stuff, this 21st century. Lurking around my eternal resting place, the Tower of London, I encounter all sorts of oddities. First of all, people do not run from this place anymore, but instead, they seem to flock to it! And what’s more—they pay money to do so! They all seem intrigued by the stories and tales of the people murdered and imprisoned here. If only they knew . . .

I appear to be quite the topic of conversation around here. And rightfully so! I was imprisoned here, wrongfully, at the hand of my husband, King Henry VIII. He said I betrayed him, that I ran around with other men! Ha! The real truth is that I did not bear him a son and, anxious to try anew with someone else, he threw me in the Tower like a common criminal, ended my life by beheading me here. How kind of him to wait until I was true and dead to engage himself to Jane Seymour—a whole day he waited! Well, let me say—Jane may have bore him the son he always wanted, but it was I who gave birth to Elizabeth, the greatest queen of England.

And what’s more, there is a dreadful display right at the site of the scaffold where many were executed—myself included. I suppose I should feel . . . honored? After all, the literature I see tossed in the rubbish bins calls this disdainful monstrosity a “memorial site.” A glass pillow sits there, as though the act of losing one’s head is a relaxing experience. Quite the contrary! 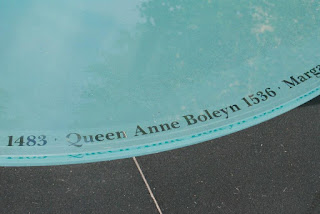 Aside from the changes in the Tower, I’ve also heard news of a book about me, Bad Girls. I have several problems with it: first of all, I am not bad! I was wronged! Secondly, I am not a girl! I am a Queen! (And it would do you well to remember that.) Third of all, I do not appreciate being lumped together with the likes of some of those women. Surely I did nothing to deserve being bound together in literary eternity with Mary Tudor!

Ms. Yolen, I appreciate your tendency to argue on my behalf. Quite the queen, you’d make.

Ms. Stemple, since when is being manipulative a crime? However, you seem to me someone who would have gotten the better of my late husband, and for that I must admire you somewhat.

And to the illustrator, Ms. Guay . . . a fine job you’ve done. It’s quite astounding how well you managed to capture my essence—have we met?

Posted by Queen Anne Boleyn, the woman who lost her head for love. Bad Girl from circa 1500-1536.