Things That Could Eat You: Nonfiction for Young Readers 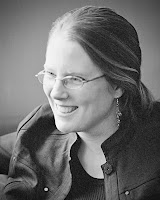 There used to be birds big enough to eat you, I tell my audience. Oh, yes. You. In one gulp.

Kids love this, the little frisson of danger and at the same time the inviolable safety of many, many years blocking them off from the savagery. It’s the draw of prehistory, what makes it so fun. Everybody loves T. rex. Nobody wants to be eaten by one.

Everybody loves terror birds too.

Imagine a really big, carnivorous ostrich. A bird as tall as a basketball hoop, with a beak as heavy and sharp as an axe. These birds didn’t fly. They didn’t need to. They ran down anything they wanted to eat, and they ate it. Terror birds ruled South America for millions of years.

Then they were gone. Now all we have are bones.

But bones tell a story.

I have plans for my next several lives. First I’m going to be a set designer; I love they way a good set is a cradle and a launch pad for theatrical magic. Then I’m going to be a marine biologist, so I can study dolphins and get paid for swimming. After that, I’ll be a paleontologist. I’ll pry the past loose from its rocky bed, bone by bone, tooth by tooth. I’ll blow the dust off chips and scraps of ancient creatures and put them back together. I’ll rewrite the lost story of life.

No, wait. Maybe I’ll just write nonfiction for children. Then I’ll get to do all of it in one narrow lifetime.

This is one of the things I love about my job—I get to find out everything. For past books, I’ve researched the Elizabethan theater, the American flag, how vipers locate prey, how much a blue whale’s tongue weighs, and what Abraham Lincoln said to his wife when she suggested that he run for president. Now I get to find out about terror birds, the top predators of ancient South America, ruthless avian rulers of an island continent. I also get to discover the vital role of a top predator in an ecosystem, how a hunter like a terror bird makes life possible for the species it devours.

Then I can turn my attention to saber-toothed cats, cunning predators who competed with our own ancestors for food. I learn how paleontologists deduce facts of behavior from bits of bone. (How do we know the saber-toothed cat was an ambush hunter? Its short bobtail, like a bobcat’s today. Cats who chase have long tails, to counterbalance the body on a turn. Cats who ambush have short ones.) I learn about pack or pride behavior, its gains (aid in raising young, access to mates, cooperative hunting to bring down large prey) and its costs (competition for food in a limited territory).

And then I put this fascinating research together with something I already know—how hungry young readers are for facts. For truth. For nonfiction.

“Is this true?” my five-year-old daughter asks insistently. “Is this a true book?” She doesn’t know the boundaries quite yet, doesn’t automatically understand that dragons and talking monkeys make a book fictional, that dinosaurs and saber-toothed tigers make it real. But she wants to know, and she wants books to tell her: what’s real and what’s a dream, what could once have eaten her and what never will.

Kids want to know, just like I do—how a giant flightless bird hunted, whether a cat with giant teeth purred or roared. (No to the first, yes to the second.) And they want books written in their own language and at their own level to tell them. Even the shape of an early reader says who it is made for. The small trim size and the compact format declare that these are books for a single young reader to treasure. The expanse of a picture book, made for sharing, is gone. Early readers are books for a child to read on her own, to hold and pore over and cherish. Language and art work together to open up a world of information. A single reader’s mind acts as a key.

I’ve written picture books and novels, poetry and prose, fiction and fantasy and “true books.” Out of all of those, nonfiction early readers are the hardest. I once did nineteen drafts of a single manuscript. First the facts must be found, selected, organized, and then the language must be agonized over. Can I make that sentence clearer? Did I just start with a prepositional phrase? That word has three syllables—can I find one with two, or one? Keep the concepts complex; keep the language simple; keep the clauses short. On every page. On every line. 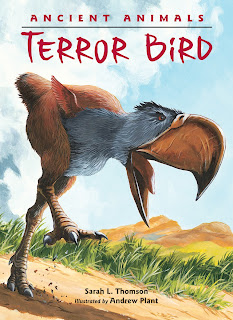 But the challenge is worth it, when I visit classrooms and see the kids' eyes light up and their hands shoot into the air. They know, you see. They know about science, about animals, about prehistory. They come armed with facts and dying to share them, enthusiastic beyond measure for books that show them the astonishing truth of their world.

Terror birds. Saber-toothed cats. Other wonderful creatures of prehistory. These animals have vanished, but their bones can still tell us their stories. We need scientists to interpret this dusty, ancient language, and we also need writers to share information about these creatures with the rest of us. Then we need readers to gobble up that information and ask for more. Maybe some of my readers, hungry for “true books,” will become scientists one day, digging up more facts, knitting together more theories, sharing what they find out, teaching us more.

I don’t need more lives after all. I just need readers who will take what I offer them into their own futures. They will be the ones to create, learn, and discover more than my own life would ever be able to hold.