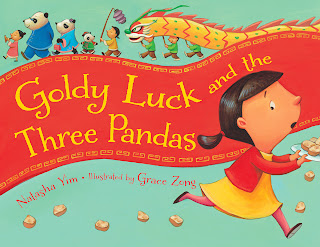 Thanks, Miranda! And thanks for stopping by.

Loved reading about your journey with GOLDY LUCK, and can't wait to read it, Natasha! Congratulations!

Wow, nine years! Your perseverance shows! Congrats, I can't wait to read this!

and after reading that wonderful saga I am going to purchase Goldy Luck too. thank you for sharing your journey with us.

Your inspiring story about the evolution of Goldy Luck is a tale that sticks with me like good rice! Persistence, perseverance and commitment to craft!

Best of luck on your blog tour!

And you persevered! I enjoyed hearing how you worked to get a fresh angle on the story.

Thoroughly enjoyed earing about your journey to publication - thanks for sharing ths with us.

Thanks for stopping by, everyone! Yes, perseverance is the game. And the wait was worthwhile -- I've learned a lot about myself as a writer and the publishing/editing process and through so much guidance have become a much better writer. Don't forget the Year of the Horse begins Jan. 31. May the new year bring you all Good Luck and many turnip cakes. Yum!