A Brief History of Michelangelo's David

A month after Michelangelo's David was unveiled in September 1504, more work was ordered. David's sling and the tree stump behind his leg were covered in gold. Some experts say David himself wore a crown of gold leaves. And he was given a belt of copper leaves to cover his nakedness.

The people of Florence hoped that their David would always bring the city luck. But as it turned out, he wasn't in the luckiest of spots.

Once lightning struck the statue and damaged the base.

Another time someone threw a bench out of a window just above David's head. The bench hit David's left arm and smashed it into three pieces. A friend of Michelangelo's rescued the pieces. Later the statue was repared. 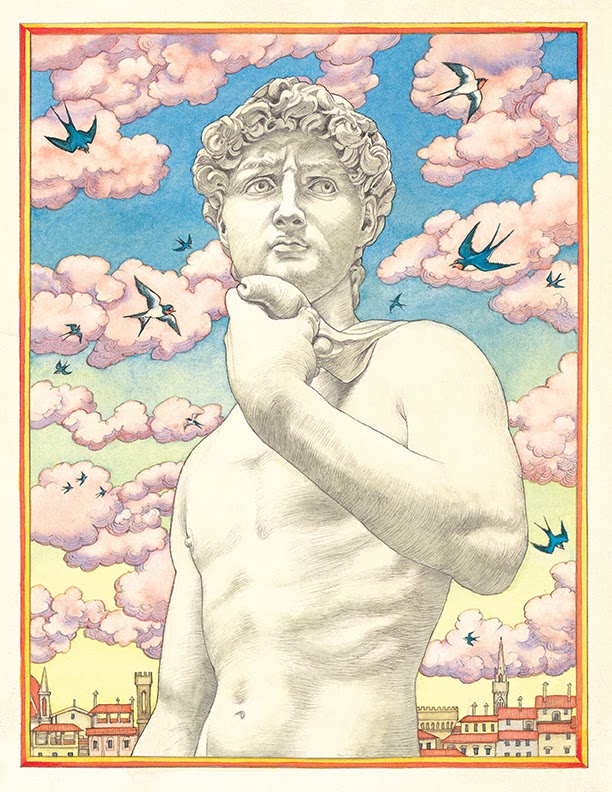 After a few centuries someone noticed that the statue was looking pretty dirty. Worse, the marble was pitted and damaged. David was being worn away.

There was only one thing to do. The statue was cleaned and moved inside for safekeeping. Of course the people of Florence could not think of a city square without David. So a copy was made to stand in the same place.

Now David has been standing for more than five hundred years. He is safe and protected. The adornments are gone. People who come to see David today see him much as he must have looked when he left Michelangelo's hands.

From the Author's Note in Stone Giant:
Michelangelo's David and How He Came to Be 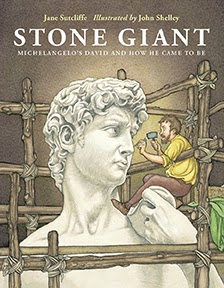 Stone Giant:
Michelangelo's David and
How He Came To Be
by Jane Sutcliffe
and illustrated by John Shelley

The stone giant had been laying in the cathedral yard before Michelangelo was even born. Many artists took a stab at it—literally—but left it behind with cuts, chips, and in one case a hole. Nobody knew how to make
David, the shepherd that defeated Goliath, emerge from the stone. Even Leonardo da Vinci said, “No, grazie.”

Florence’s officials refused to give up on the giant, however. And native son, Michelangelo, was persuaded to return from Rome to take a look. He saw something in the giant block of marble. He chipped away at what was not-David for nearly three years. Slowly, bit-by-bit, a foot, a hand, a nose
. . . and then his David appeared.

In this moving, inspiring story, author Jane Sutcliffe uncovers the artist’s heart and drive to create. Like David overcoming Goliath, Michelangelo conquered a giant and gave his city a symbol of grit and endurance.

John Shelley’s expressive illustrations are full of whimsy, period detail, and is evocative of Michelangelo’s own drawings and design notes.

When Jane Sutcliffe visited Florence, she sat in the Galleria dell'Accademia and stared at the David for a very long time. She knew there was a story in that face. Jane is the author of Leonardo's Monster and The Attack on Pearl Harbor, as well as nearly two dozen biographies for young readers. She lives with her family on a farm in Tolland, Connecticut.

John Shelley once stayed in a bed-and-breakfast overlooking the square where the replica of the David stands. The sketch below is from his journal at the time. John is the illustrator of more than foryy children's books, including Family Reminders by Julie Danneberg. He lives with his daughter in Norwich, England.

What an interesting topic. I learned so much about this giant in just these few paragraphs.Sounds like another great story from Jane Sutcliffe. Congratulations on the new release!

Good article... May I share an article about Florence from Piazza Michelangelo in http://stenote.blogspot.com/2018/01/florence-view-from-piazzale-michelangelo.html
Watch the video in youtube https://youtu.be/pg1apQjPrkY