From Trivia to Timeless with Heather L. Montgomery

Author Heather L. Montgomery (known in some circles as the Queen of Yucky Science) talks about her inspiration for Bugs Don't Hug: Six-Legged Parents and Their Kids and how relating insects to humans was the key to making the book accessible for readers of all ages. 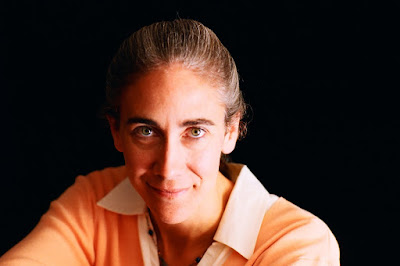 It’s not too hard to hook kids with a topic like insects. Kids love trivia about crazy creatures. But a great picture book must resonate with both the children and the adults who read to them. It needs to convey a message that speaks to everyone. And not all adults love insects as much as I do. So, for years I cast about, searching for a six-legged message that could bring together kids and the adults who love them.

Bugs Don’t Hug came from a moment of heartbreak I witnessed when hiking with a friend and her kids.

“Mommy, mommy, mom – look!” Christopher held up his prize, one spiny leg clinging to the edge of his palm.

My friend Carey’s cheek twitched. Her voice wavered a bit as she stepped backwards and instructed him to return the cricket to nature. As her son cradled the creature and trotted away, Cary shuddered. She worked hard to keep her emotions in check when every instinct would have had her stomping the insect.

That moment of family strife ate at me. Christopher and I had always shared a passion for bugs, but Carey held a lifetime of loathing. Observing that tiny rip in the bond between mother and child that day, my heart hurt.

We headed down the trail. At every stop, the kids and I turned over logs and marveled at the life underneath. Carey stood back, patient, waiting, but with tension still on her face. 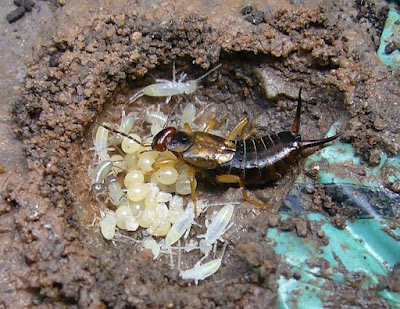 "Look!" Christopher pointed at a dark body curving around miniature white versions of herself.

"An earwig," I told the kids. "And she’s keeping her babies safe."

"She’ll feed them too," I explained. "And if any kid strays too far, she’ll chase after them, just like your mom keeps you from running out into the road."

"And when they were still eggs," I said, "she gave each one a bath."

Right then and there, it clicked. My friend suddenly cared because she shared something with the six-legged mother. And that was the universal message I needed.

Later I wondered what other kinds of insects take care of their young. I dug into my favorite part of the book-making process – research! After combing academic tomes, interviewing experts, and studying scientific papers for a few years, I had a list of fascinating facts.

But straight facts aren’t much fun. So I played with those facts. I took each behavior and I exaggerated it. What if, instead of just removing his young’s frass (poop) from their tunnel, a daddy ambrosia beetle was on diaper duty? What if, instead of forming a natal chamber out of feces, a mother dung beetle was baking a birthday cake? 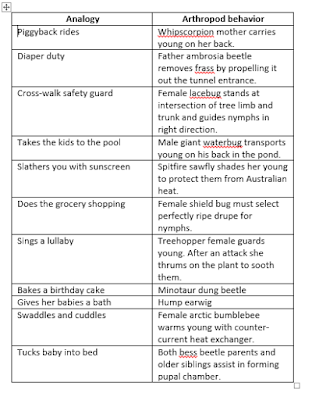 This was getting fun. I could envision kids giggling at this. But a list – even a giggle-inducing list – is just bits of trivia. A random list doesn’t lead to a universal message.

I dissected picture books, seeking ways to turn lists into literature. What I was lacking was a solid structure. The structure that worked? A “through-the-day” sequence. That’s a structure young children can relate to, and parents know all too well the challenges of the daily routine. This structure reinforced the book’s theme. It turned that trivia into a timeless message of all that we have in common – even with our six-legged friends.

And that is how a moment of heartbreak became a book. 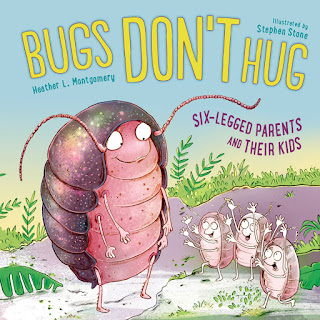 Thanks for sharing this pivotal moment in the life of Bugs Don't Hug. We all need to connect with a concept to really feel it and especially when it's a concept we don't, um, appreciate! Well done, Heather!